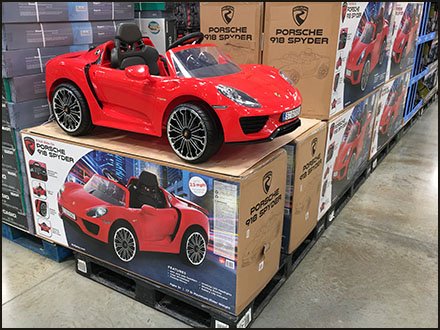 This Kids Cars And Toy Wagon Merchandising index page aggregates links
to all post and photos of retail merchandising, display, and outfitting
as well as deep Background courtesy of Wikipedia.

BACKSTORY: A toy wagon has the same structure as the traditional, larger wagon, but is much smaller and has an open top. An average wagon is able to seat one child, and is generally propelled by human power through a handle at the front. Some famous brands are Radio Flyer, Red Rider, Northern Tool and Equipment, Lowe’s, Cardinal, and Speedway Express.

Toy wagons have been around since the late 19th century, and are traditionally painted red. They were originally made of wood. Antonio Pasin started making wagons in 1917 and eventually started the Radio Flyer company. He produced many of them in his workshop in Chicago and they became a national hit after the 1933 Chicago World Fair. His toy wagons helped bring people back from the thoughts of the looming war to their simple pleasures.

People also use wagons for small, outdoor projects. Companies such as Northern Tool, Lowe’s, and Tractor Supply Company make wagons specifically for outdoor work. Usually they are painted a different color than red and are made of metal. They are also usually larger and more expensive. Wagons can be useful for moving dirt, wood chips, mulch, or gravel. They can also be used in gardening for moving plants. Nursery wagons are available just for professional gardening. Nursery wagons let dirt and water go through the bottom and are good for plants and pots in a greenhouse. They can also be used for moving camping gear or boxes. Some utility wagons are self-propelled by small motors so that the user can handle heavier loads on rough, uneven terrain. These wagons are often equipped with a tilting cargo bed which allows the user to dump their cargo more easily, making them suitable for small farms. Some companies, such as Speedway Express, make huge 8-wheeled wagons that are made of wood, usually handmade by the Amish.

For all Kids Cars And
Toy Wagon Merchandising resources…