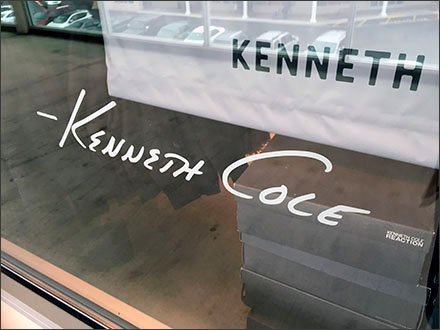 SCROLL DOWN FOR PHOTOS AND LINKS…
…to Kenneth Cole Retail Fixtures

This Kenneth Cole Retail Fixtures index page aggregates links
to all post and photos of the brand’s retail merchandising and outfitting.

Kenneth Cole Productions, Inc. is an American fashion house founded in 1982 by Kenneth Cole. Wanting to preview his line of shoes at Market Week at the New York Hilton, but unable to afford the purchase of a hotel room or showroom to display his items, Kenneth Cole inquired about parking a trailer two blocks from the Hilton Hotel. Upon discovering that permits for trailers were only granted to utility and production companies, Cole changed the name of his company from Kenneth Cole Incorporated to Kenneth Cole Productions, and applied for a permit to film the full-length film, “The Birth of a Shoe Company”. In two and a half days, Kenneth Cole Productions sold forty thousand pairs of shoes, while chronicling the beginning of the company on film.[5]

In 1994, Kenneth Cole went public, and has been included on Forbes annual list of 200 Best Small Companies four times.[6]

Since 1985, Kenneth Cole has been openly involved in publicly supporting AIDS awareness and research. He is considered the first in the fashion industry to do so.[6] He uses fashion as a medium to promote socially conscious ads to help fight various causes from AIDS to homelessness. He has donated proceeds to such organizations as Mentoring USA, amfAR and Rock the Vote.[6]

Kenneth Cole’s socially conscious advertising for the causes that he champions can be somewhat controversial but are always meant to encourage change. One such example was his campaign for World AIDS Day in 2005. He designed T-shirts for the campaign which were sold at such stores as Barneys New York, Scoop, and Louis Boston. The messages on the shirts stated either, “We All Have AIDS” or “I Have AIDS.” Cole created the shirts in hopes that those with or without AIDS would wear the shirts, to help diminish the stigma attached to the disease. Cole stated, “There is a legend of the Danish king, Christian X, who, during World War II, when Hitler insisted all Jews publicly wear a yellow Star of David, would wear the star himself, hence making it difficult to differentiate who was Jewish. This is kind of like that, hopefully.”[8]

In August 2006, it was announced that Kenneth Cole Productions would stop selling fur in all of their garments for the Fall 2007 Fashion Season.[9]

In the summer of 2007, Kenneth Cole Productions also began their “Awearness” Campaign, which will produce a line of T-shirts to benefit the charities that the company supports, and proceeds will go to the Awearness Fund.[12] The campaign is further promoted by a book “Awearness: Inspiring Stories About How to Make a Difference” featuring celebrities assisting various causes.[13]

On May 1, 2009, Kenneth Cole delivered Northeastern University‘s keynote address at the Commencement ceremony.[14]

In 1998, People Magazine voted Cole as “Sexiest Businessman of the Year.”[6]

On May 14, 2009, The Legal Aid Society of New York City honored Kenneth Cole with its inaugural Theodore Roosevelt Corporate Award at the Waldorf Astoria during its Servant of Justice Award Dinner. Proceeds will go to benefit struggling New Yorkers who live in poverty. [1]

In November 2011, Cole was honored by the Ride of Fame and a double decker tour bus was dedicated to him in New York City.[15]

This Kenneth Cole Retail Fixtures index page aggregates links
to all post and photos of the brand’s retail merchandising and outfitting.

For all Cole resources see…