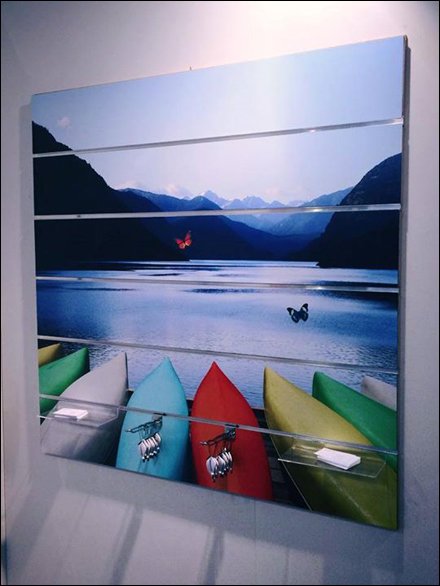 SCROLL DOWN FOR PHOTOS AND LINKS…
…to Kayak Fixtures / Kayak Merchandising

This Kayak Fixtures / Kayak Merchandising index page aggregates links
to all post and photos of retail merchandising, display, and outfitting
as well as deep Background courtesy of Wikipedia.

BACKSTORY: A kayak is a small, narrow watercraft which is propelled by means of a double-bladed paddle. The word kayak originates from the Greenlandic word qajaq(IPA: [qajaq]). The traditional kayak has a covered deck and one or more cockpits, each seating one paddler. The cockpit is sometimes covered by a spray deck that prevents the entry of water from waves or spray and makes it possible for suitably skilled kayakers to roll the kayak: that is, to capsize and right it without it filling with water or ejecting the paddler.

Interior 360 degree photosphere of a kayak at the Smithsonian National Museum of the American Indian. Click for an immersive 360 degree view

Some modern boats vary considerably from a traditional design but still claim the title “kayak”, for instance in eliminating the cockpit by seating the paddler on top of the boat (“sit-on-top” kayaks); having inflated air chambers surrounding the boat; replacing the single hull by twin hulls, and replacing paddles with other human-powered propulsion methods, such as foot-powered rotational propellers and “flippers”. Kayaks are also being sailed, as well as propelled by means of small electric motors, and even by outboard gas engines. The kayak was first used by the indigenous Aleut, Inuit, Yupik and possibly Ainu[1] hunters in subarctic regions of the world. (SOURCE: Wikipedia)

BACKSTORY: Paddles commonly used in canoes consist of a wooden, fibreglass, carbon fibre or metal rod (the shaft) with a handle on one end and a rigid sheet (the blade) on the other end. Paddles for use in kayaks are longer, with a blade on each end; they are handled from the middle of the shaft.

Kayak paddles having blades in the same plane (when viewed down the shaft) are called “un-feathered.” Paddles with blades in different planes are called “feathered”. Feathered paddles are measured by the degree of feather, such as 30, 45, or even 90 degrees. Many modern paddles are made of two pieces which can be snapped together in either feathered or unfeathered settings. The shaft is normally straight but in some cases a ‘crank’ is added with the aim of making the paddle more comfortable and reducing the strain on the wrist. Because the kayak paddle is not supported by the boat, paddles made of lighter materials are desired; it is not uncommon for a kayak paddle to be two pounds (32 ounces (910 grams) ) or less and very expensive paddles can be as light as 22 ounces (620 grams). In addition, weight savings are more desirable at the ends of the paddle rather than in the middle.

Cheaper kayak paddles have an aluminium shaft while more expensive ones use a lighter fibreglass or carbon fibre shaft. Some paddles have a smaller diameter shaft for people with smaller hands. Paddle length varies with a longer paddle being better suited for stronger people, taller people, and people using the paddle in a wider kayak. Some paddle makers have an online paddle size calculator. Blades vary in size and shape. A blade with a larger surface area may be desirable for a strong person with good shoulder joints, but tiring for a weaker person or a person with less than perfect shoulder joints. Some paddle makers offer blades in three sizes.[1]

Because normal paddling involves alternately dipping and raising the paddle blades, the colour of the blades may affect the visibility of the kayaker to powerboats operators under limited visibility conditions. For this reason white or yellow blades may offer a safety advantage over black or blue blades. Of course, kayakers should wear a headlamp or have other lighting on their kayak under conditions of limited lighting. However, if a powerboat operator must look straight into a sun low in the sky to see a kayaker, the motion of brightly coloured paddle blades may be of more value than lighting on the kayak. Highly reflective water resistant tape (e.g. SOLAS tape) may be affixed to the paddle blades and boat to enhance visibility. (SOURCE: Wikipedia)

Anything to Paddle A Boat Display

For a focus on Kayak Paddles outfitting see…

For a place to park your boat see…