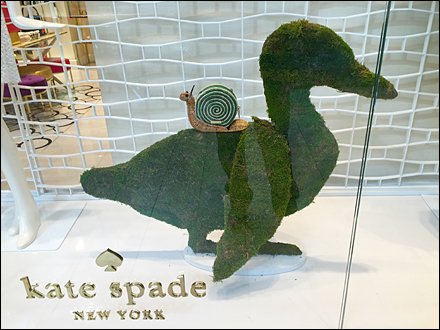 SCROLL DOWN FOR PHOTOS AND LINKS…
…to Kate Spade Retail Fixtures

This Kate Spade Retail Fixtures index page aggregates links
to all post and photos of the brand’s retail merchandising and outfitting.

BACKSTORY: Kate Valentine,[1] formerly known as Kate Spade[2] (born Katherine Noel Brosnahan; December 24, 1962, present full legal name Katherine Noel Frances Valentine Brosnahan Spade[2][3]), is an American fashion designer and businesswoman. She is the namesake and former co-owner of the designer brand, Kate Spade New York. In 2006, she sold the last of her shares in that company.[4] In 2016, she and her partners officially launched a new fashion brand called Frances Valentine.[2]

Brosnahan was born in Kansas City, Missouri. She graduated from St. Teresa’s Academy, an all-girl Catholic high school. She attended the University of Kansas and then transferred to Arizona State University, joined Kappa Kappa Gamma, and graduated with a degree in journalism in 1985.[5] She is of Irish descent.

In 1986, she worked in the accessories department of Mademoiselle in Manhattan, where she was credited in the magazine’s masthead with her maiden name as Katy Brosnahan. While at Mademoiselle, she moved in with Andy Spade (brother of actor and comic David Spade), a native of Scottsdale, Arizona. The two had worked side-by-side as salespersons in a men’s clothing store, Carter’s Men Shop in Phoenix, Arizona.[6] Together, they were featured in the magazine as part of a photo story on couples in love.

She left Mademoiselle in 1991, with the title of senior fashion editor/head of accessories. While working for Mademoiselle, she had noticed that the market lacked stylish and sensible handbags, and she decided to create her own.[7]

In 2004, “kate spade at home” was launched as a home collection brand. It featured bedding, bath items, china, wallpaper and various items for the home. She also shared about her personal style and philosophies in her three books: Manners, Occasions, and Style. The brand went international in 2004, when a store was opened in Aoyama, Tokyo, Japan.[9]

After selling the remaining portion of her ownership stake in the Kate Spade brand in 2006,[4] Spade took time off to raise her daughter. In 2016, she and her partners launched a new brand called Frances Valentine, a collection of luxury footwear and handbags. The names Frances and Valentine are from her family members and she added the two names to her own legal name.[2]

Kate Spade New York has over 140 retail shops and outlet stores across the United States, and more than 175 shops internationally. Their products are sold in more than 450 stores worldwide. The company grew to include retail outlets as well as selling their products through such high-end stores as Bloomingdale’s, Saks Fifth Avenue, and Neiman Marcus.

In 1996, the Council of Fashion Designers of America awarded Spade “America’s New Fashion Talent in Accessories” for her classic designs. In 1998, CFDA once again honored her for “Best Accessory Designer of the Year”.

In 1999, she was honored when her handbags were exhibited at the Cooper Hewitt Museum for the first national design triennial, celebrating American design excellence.[9] Her home collection won her three design awards in 2004, including, House Beautiful‘s “Giants of Design Award for Tastemaker”, Bon Appetit‘s “American Food and Entertaining Award for Designer of the Year”, and Elle Decor‘s “Elle Decor International Design Award for Bedding”.

In 2017 she was welcomed into the Entrepreneur Hall of Fame at the Henry W. Bloch School of Management at the University of Missouri, Kansas City.[13]

Also, in 2017, she was named one of the Most Creative People in Business by Fast Company. [14]

Spade married Andy Spade, the brother of actor/comedian David Spade, in 1994. The couple has one child, Frances Beatrix Spade, born in February 2005.[9] Her niece is actress Rachel Brosnahan.[15] (SOURCE: Wikipedia)