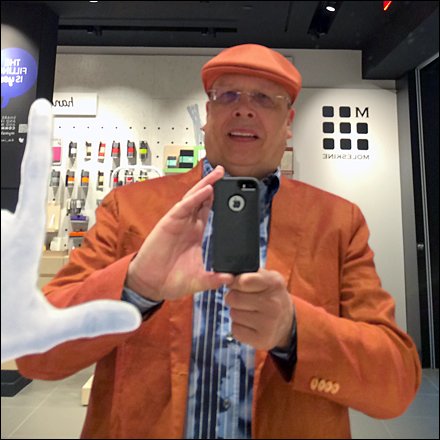 SCROLL DOWN FOR PHOTOS AND LINKS…
…to Kangol Retail Fixtures

This Kangol Retail Fixtures index page aggregates links
to all post and photos of the brand’s retail merchandising and outfitting.

BACKSTORY: Kangol is a British clothing company famous for its headwear. Founded in the 1920s,[1] by Jewish Polish[2][3] World War I veteran Jacques Spreiregen, Kangol (the K from knitting,[4] the ANG from angora, and the OL from wool) produced hats for workers, golfers, and especially soldiers. In 1938, Spreiregen, who was working in London as an importer, opened a factory at Cleator, Cumbria, England which he ran with his nephew Joseph Meisner. A second factory was opened at nearby Frizington, and later, under the direction of Spreiregen’s younger nephew Sylvain Meisner, a third factory, manufacturing motorcycle helmets and seat belts in Carlisle. They were the major beret suppliers to the armed forces during World War II, including famously Field Marshal Montgomery.[3]

During and after the war, Kangol berets were the height of fashion. In the 1960s, designers Mary Quant and Pierre Cardin worked with the company, whose products graced the heads of the rich and famous, including the Beatles and Arnold Palmer, and later Diana, Princess of Wales. The company also supplied uniformed organizations such as the Scout Association.[3]

The Kangaroo logo was adopted by Kangol in 1983 because Americans were always asking where “they could get the Kangaroo hat…” (http://www.bollmanhats.com/brands/kangol.html). No Kangol hat has ever actually been manufactured in Australia.

In the 1980s Kangol berets entered a new phase of fashion history with their adoption by members of the hip-hop community, such as Grandmaster Flash, Run-DMC, LL Cool J, Slick Rick, Kangol Kid of UTFO, and The Notorious B.I.G. The brand was popularized even more by the 1991 movie New Jack City. The release of more consciously stylish products in the 1990s such as the furgora (angora-wool mix) Spitfire, was helped by its presence upon the head of Samuel L. Jackson in 1997.[3] Kevin Eubanks, bandleader for The Tonight Show with Jay Leno, sported a Kangol beret on an almost nightly basis. In 2009, Eminem wore the Cotton Twill Army Cap Kangol hat on his Beautiful video.[citation needed]

Kangol has been owned by Sports Direct since 2006, when they acquired the brand from private equity fund August Equity Trust. Licences to manufacture and sell Kangol apparel have been sold to many different companies including D2 and Topshop. The global rights to Kangol hats have been held by American hatmakers Bollman Hat Company since 2002.[5]

It was announced in February 2009 that Bollman were reviewing their worldwide operations, putting 33 jobs and the future of the Kangol head office in Cleator in doubt.[6] On 6 April 2009, it was announced that the original factory would be converted to a warehouse with the loss of 25 jobs. Only seven employees now remain employed at the company’s original site and the outlet shop will close at the end of August 2009. However, hats will continue to be made at their sites in Eastern Europe and the United States.[7]

Wesley Snipes as Nino Brown and his gang, the Cash Money Brothers, wear hats by Kangol throughout the movie New Jack City.

Samuel L. Jackson as Ordell Robbie wore a Kangol back to front in the movie Jackie Brown.

The hip hop group De La Soul referenced Kangol in the song “Fallin'” (featuring Teenage Fanclub) on the soundtrack of the 1993 film Judgment Night with the lines “I knew I blew the whole fandango/When the drum crew never wore a Kangol”.

Rapper Dana Dane tells a story of how his straw hat turns into a Kangol in his song, “Cinderfella Dana Dane”.

The movie Straight Outta Compton features a scene where Ice Cube gets into a dispute with a New York rapper, eventually telling him “Wearing a Kangol don’t make you LL Cool J!” (SOURCE: Wikipedia)

EDITOR’S NOTE: Kangol Retail Fixtures
Topmost posts may be scheduled but not yet live.
Please click further down the list if necessary