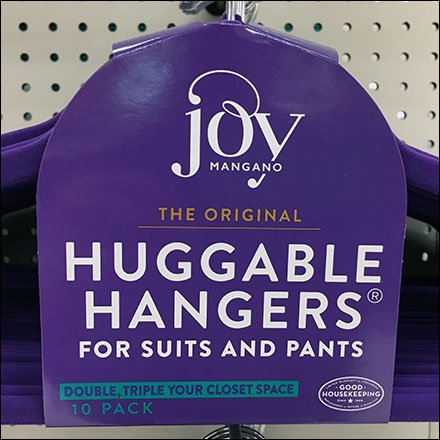 SCROLL DOWN FOR PHOTOS AND LINKS…
…to Joy Mangano Retail Fixtures

This Joy Mangano Retail Fixtures index page aggregates links
to all post and photos of the brand’s retail merchandising and outfitting.

Joy Mangano (/ˌmæŋˈɡænoʊ/; born February 1, 1956)[2] is an American inventor and entrepreneur known for inventions such as the self-wringing Miracle Mop.[3][4] She is the president of Ingenious Designs, LLC, and appears regularly on the US television shopping channel HSN. Joy Mangano is also the author of INVENTING JOY released by Simon & Schuster.

The 2015 film Joy was loosely based on her life. Jennifer Lawrence was nominated for the Academy Award for Best Actress for her portrayal of Mangano.[5][6]

Mangano was born in 1956, in East Meadow, New York, to Italian-American parents. Mangano began inventing at an early age when, as a teenager working at an animal hospital in Huntington, New York, on Long Island, she dreamed up a fluorescent flea collar to keep pets safe. A product with a similar design was released the next year by Hartz Mountain. After graduating from Pace University with a degree in business administration in 1978, she held a variety of jobs,[4] including waitress[3] and airline reservations manager while raising her three children as a divorced mother.[4]

In 1990 after growing frustrated with ordinary mops, Mangano developed her first invention, the Miracle Mop, a self-wringing plastic mop with a head made from a continuous loop of 300 feet (90 meters) of cotton that can be easily wrung out without getting the user’s hands wet. With her own savings and investments from family and friends, she made a prototype and manufactured 100 units.[citation needed] Early assembly was done in her father’s body shop in Deer Park in 1991.

After selling the mop at trade shows and in local stores on Long Island, she sold 1,000 units on consignment to QVC.[citation needed] It sold modestly at first, but once QVC allowed Mangano to go on-air to sell it herself, she sold 18,000 mops in less than a half hour.[2] Mangano incorporated her business as Arma Products, later renaming it Ingenious Designs. She sold Ingenious Designs to USA Networks, the parent company of the Home Shopping Network, in 1999.[4] By the year 2000, her company was selling $10 million worth of Miracle Mops per year.[4]

Clothes It All Luggage System – wheeled luggage with organizational features like a padded laptop compartment, a toiletry organizer, a pocket for plane tickets, and removable dividers. They range from smaller duffel bags to a 22-inch (56-centimeter) portable dresser with removable drawers, as well as a briefcase and pet carrier.[10]

Performance Platforms – shoes with a rubber platform heel that gives the wearer extra height. In May 2010, Mangano sold 30,000 pairs in three hours on HSN.[7] The line began as sneakers, and has since branched to Mary Janes, mules, and sandals. The shoes are produced in conjunction with the Grasshoppers division of the Stride Rite Corporation.[10]

Comfort & Joy Textiles – bedding made from Supima cotton and down alternative with a reversible, zippered duvet cover and sheets that are attached to the bed skirt for removal and cleaning.[10]

Shades Readers – a line of reading glasses sold in sets of three or more so that they can be kept around the home and office for easy access.[10] Mangano has sold more than a million pairs.[12] (SOURCE: Wikipedia)