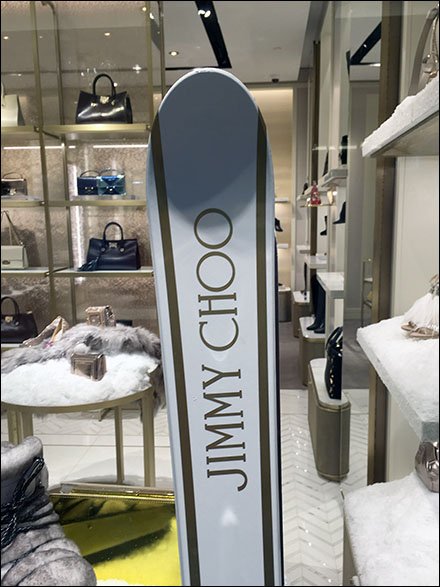 SCROLL DOWN FOR PHOTOS AND LINKS…
…to Jimmy Choo Retail Fixtures

This Jimmy Choo Retail Fixtures index page aggregates links
to all post and photos of the brand’s retail merchandising and outfitting.

Datuk Jimmy Choo Yeang Keat OBE,[2] (born 15 November 1948) is a Malaysian fashion designer based in the United Kingdom. He is best known for co-founding Jimmy Choo Ltd, which became known for its handmade women’s shoes.

Choo was born in Penang, Malaysia, into a family of shoemakers. His family name is Chow but was misspelled on his birth certificate as Choo. He studied at Shih Chung Primary School in Love Lane, Penang. His father taught him how to make shoes, and it is often reported that he made his first shoe when he was 11 years old. [3]

Choo graduated from Cordwainers Technical College in Hackney (now part of the London College of Fashion) in 1983. Choo worked part-time at restaurants and as a cleaner at a shoe factory to help fund his college education. After graduation Choo began work at a shop in Hackney which he opened in 1986 by renting an old hospital building. His craftsmanship and designs were soon noticed and his creations became featured in eight pages in a 1988 issue of Vogue. Patronage from Diana, Princess of Wales from 1990 further boosted his image.

Choo lives in London and is currently involved in a project to set up a shoemaking institute in Malaysia. His company continues to produce expensive high-end shoes.

He is married to Rebecca Choo (née Choi) from Hong Kong. The couple have a son, Danny, and a daughter, Emily. A niece of the couple, Lucy Choi, followed in her uncle’s footsteps by becoming a shoe designer.

EDITOR’S NOTE: Jimmy Choo Retail Fixtures
Topmost posts may be scheduled but not yet live.
Please click further down the list if necessary