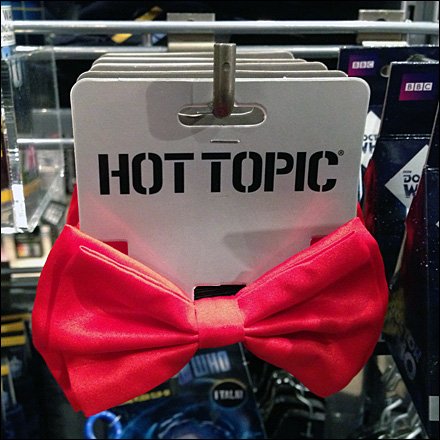 SCROLL DOWN FOR PHOTOS AND LINKS…
…to Hot Topic Retail Fixtures

This Hot Topic Retail Fixtures index page aggregates links
to all post and photos of retail merchandising, display, and outfitting
as well as deep Background courtesy of Wikipedia.

BACKSTORY: Hot Topic (stylized as HOT TOPIC) is a retail chain specializing in counterculture-related clothing and accessories, as well as licensed music. The stores are aimed towards an audience interested in rock music and video gaming, and most of their audience ranges from teens to young adults. Approximately 40% of Hot Topic’s revenue comes from sales of licensed band T-shirts.[4] Hot Topic often negotiates exclusive licensing arrangements with musical artists, movie studios, and graphic artists.[citation needed] The majority of the stores are located in regional shopping malls.[4]

The first Hot Topic store was opened in November 1989 in Montclair Plaza, Montclair, California,[5] by Orv Madden, a former executive at The Children’s Place, who retired as CEO in 2000 and was replaced by Betsy McLaughlin, who headed the company until 2011. Lisa Harper assumed the position of CEO in March 2011 until Steve Vranes was announced as the new CEO in 2016. The company went public and began trading on NASDAQ in 1996.

The store has been through a number of phases in its history, reflective of various alternative culture and pop culture(including geek culture) trends (prime examples being Lolita, goth, or cosplay outfits) in the early 2000s, the store was known for heavily marketing nu-metal merchandise relating to bands. During that period, the store was also known for its sales of controversial gel bracelets (often rumored to be “sex bracelets”) as well as the equally controversial styles of phat pants-inspired bondage pants[7] popular among teenagers in the late 1990s and early-to-mid 2000s.

The store later focused on skinny jeans and merchandise related to scene, emo and hardcore punk music and fashion, with a much larger focus on goths and spiky chokers and clothing. At present, the store’s selection is largely focused on licensed video game merchandise and internet memes popular on sites such as tumblr, as well as anime, manga, Japanese films and the associated otaku subculture.