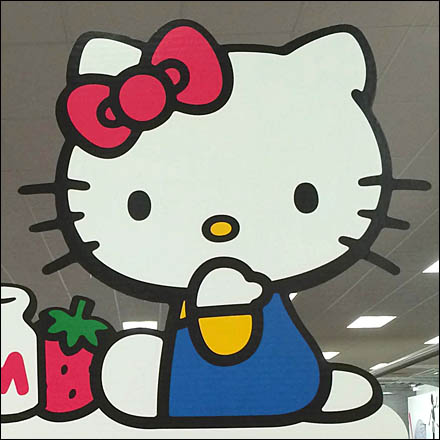 This Hello Kitty Retail Fixtures And Displays index page aggregates links
to all post and photos of the brand’s retail merchandising and outfitting.

Shortly after her creation in 1974, the Hello Kitty vinyl coin purse was introduced by Sanrio in March 1975. The character was then brought to the United States in 1976.[5][6] The character is a staple of the kawaii segment of Japanese popular culture.[7] By 2010, Sanrio had groomed Hello Kitty into a global marketing phenomenon worth $5 billion a year.[8] By 2014, when Hello Kitty was 40 years old, she was worth about $7 billion a year, all without advertising except on Sanrio’s, related show producers’, and ticket sales’ webpages and at show venues and nearby locations.[9]

Originally aimed at pre-adolescent females, Hello Kitty’s market has broadened to include adult consumers, being found on a variety of products ranging from school supplies to fashion accessories. Including various diamond necklaces. Several Hello Kitty TV series, targeted towards children, have been produced. There have been two sanrio theme parks based off of Hello Kitty, Harmonyland and Sanrio Puroland.

In 1962, Shintaro Tsuji, founder of Sanrio, began selling rubber sandals with flowers painted on them.[10] Tsuji noted the profits gained by adding a cute design to the sandals and hired cartoonists to design cute characters for his merchandise.[10] The company produced a line of character merchandise around gift-giving occasions.[11] Hello Kitty was designed by Yuko Shimizuand was added to the lineup of early Sanrio characters in 1974.[6] The character’s first appearance on an item was a vinyl coin purse in Japan where she was pictured sitting between a bottle of milk and a goldfish bowl.[12] She first appeared in the United States in 1976.[5]

Sanrio decided to make Hello Kitty British because at the time when she was created, foreign countries, in particular Britain, were trendy in Japan. In addition, Sanrio already had a number of characters set in the US and they wanted Hello Kitty to be different.[7][13]Shimizu got the name Kitty from Lewis Carroll‘s Through the Looking-Glass, where in a scene early in the book Alice plays with a cat she calls Kitty.[14] Sanrio’s motto is “social communication” and Tsuji wanted the brand name to reflect that. He first considered “Hi Kitty” before settling on “Hello” for the greeting.[15]

Spokespeople for Sanrio have said that Hello Kitty does not have a mouth because they want people to “project their feelings onto the character” and “be happy or sad together with Hello Kitty.”[7][16] Another explanation Sanrio has given for her lack of a mouth is that she “speaks from the heart. She’s Sanrio’s ambassador to the world and isn’t bound to any particular language”.[13] Representatives for Sanrio have said they see Hello Kitty as a symbol of friendship, and they hope she will encourage friendship between people across the world.[7] While there has been some speculation[17][18] that Hello Kitty has its origins in Maneki Neko, and that the name Hello Kitty itself is a back-translation of Maneki Neko, which means beckoning cat in English, others disagree.[19]

Hello Kitty sold well immediately after the 1974 launch, and Sanrio’s sales increased seven times up until they slumped temporarily in 1978.[7][20] New series with Hello Kitty in different themed designs are released regularly, following current trends. Yuko Yamaguchi, the main designer for most of Hello Kitty’s history, has said that she is inspired by fashion, movies and TV in creating new designs.[7][20]

Hello Kitty was originally marketed only to young girls. In the 1990s the target market for Hello Kitty was broadened to include teens and grown-ups as a retro brand.[7][13]Marketed to those who could not get Hello Kitty merchandise as children, or who fondly remember items they had, Sanrio began selling Hello Kitty branded products like purses and laptops.[7][13][20] The 1994–1996 Face series was the first to be designed for a more mature appeal.[7]

According to Sanrio, in 1999 Hello Kitty appeared on 12,000 different products yearly.[15] By 2008, Hello Kitty was responsible for half of Sanrio’s $1 billion revenue and there were over 50,000 different Hello Kitty branded products in more than 60 countries.[13] Beginning in 2007, following trends in Japan, Sanrio began using darker designs for Hello Kitty with more black and less pink, and pulling away from kawaii styles.[20]

Hello Kitty and Mimmy celebrated their 40th Anniversary on 1/November/2014. The “Arigato Everyone Birthday Celebration” took place in Sanrio Puroland in Tokyo for several days.[21]

EDITOR’S NOTE: Hello Kitty Retail Fixtures And Displays
Topmost posts may be scheduled but not yet live.
Please click further down the list if necessary.