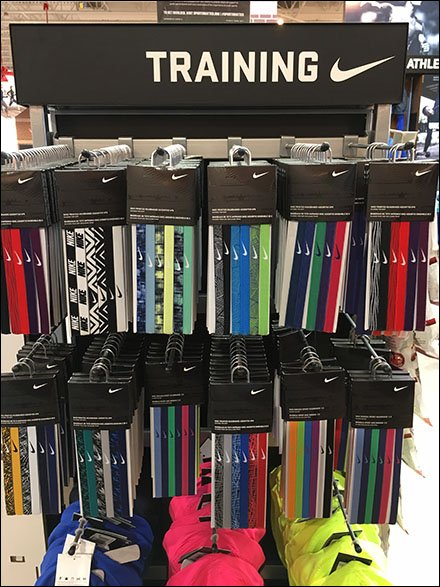 SCROLL DOWN FOR PHOTOS AND LINKS…
…to Headband Store Fixtures

This Headband Store Fixtures index page aggregates links
to all post and photos of retail merchandising, display, and outfitting
as well as deep Background courtesy of Wikipedia.

BACKSTORY: A headband is a clothing accessory worn in the hair or around the forehead, usually to hold hair away from the face or eyes. Headbands generally consist of a loop of elastic material or a horseshoe-shaped piece of flexible plastic or metal. They come in assorted shapes and sizes and are used for both fashion and practical or utilitarian purposes. In the UK, Horseshoe-shaped headbands are sometimes called “Alice bands” after the headbands that Alice is often depicted wearing in Through the Looking-Glass.[1]

The beginning of headbands was no later than around 475 BC to 330 BC, with the ancient Greeks, who wore hair wreaths. The Greeks and Romans wore these pieces for very special occasions or an important event. Cultures such as the Etruscans and Romans started to decorate their wreaths with jewels made up of gold and silver. While wreaths are certainly a likely beginning of today’s headbands, some believe that current day hair bands have slowly taken shape from scarves that were worn around the head or were modified from the band of hats that tied under the chin.

In the early 20th century, wide headbands known as headache bands were very popular accessories in women’s fashion. Their name came from the belief that the tight pressure they provided around the forehead could relieve or prevent headaches. The French called such a garment a bandeau (bandeaux, plural). In the 1910s, headache bands would likely have been more lacy in design—a crochet central panel decorated with ribbons and rosettes and bordered with lace, for example.[2] Examples from the 1920s and 1930s are more apt to be dramatic sheaths in exotic fabrics and decorated with feathers, and would have been worn with fashions by couturiers such as Paul Poiret.[3] These sorts of headache bands probably achieved their peak of popularity in the 1920s. Today, items called headache bands are apt to be strictly utilitarian and medical in focus. During the same period, jewelled headache bands or headbands, often in precious metals and precious gems, were popular.[4]

In Japanese culture, hachimaki headbands may symbolise determination or devotion.

Contemporary Korean high school students, particularly male students, are often portrayed donning headbands in preparation for the rigorous college entrance examinations. Students commonly write encouraging or inspiring phrases on these headbands, such as “do or die!”. This practice has been largely popularized by the media. (SOURCE: Wikipedia)

For all Headband Store Fixtures resources…