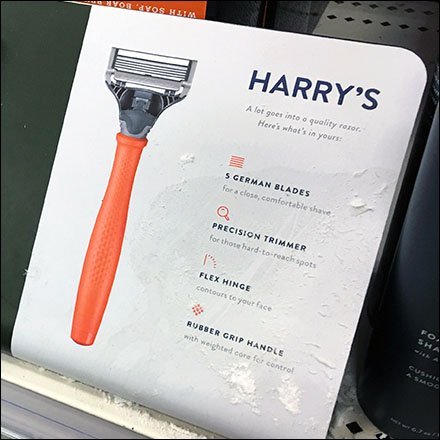 This Harry’s Razors Retail Fixtures index page aggregates links
to all post and photos of the brand’s retail merchandising and outfitting.

BACKSTORY: Harry’s is a New York-based company that manufactures and sells shaving equipment via mail order.[1][2][3][4][5][6] The company was founded in March 2013 by Andy Katz-Mayfield and Jeff Raider.[7] In January 2014, Harry’s purchased the Feintechnik razor factory in Germany for a reported $100 million in an effort to provide control over the entire process of manufacturing their products.[8] In July 2015 the company received a third-round financing of US$75.6 million.[9][10] In an interview published in July 2016, Katz-Mayfield said Harry’s had two million customers.[11] As of January 2017, Harry’s shaving products are also available at Target stores.[12][13] (SOURCE: Wikipedia)

For all Orange Fixtures resources see…