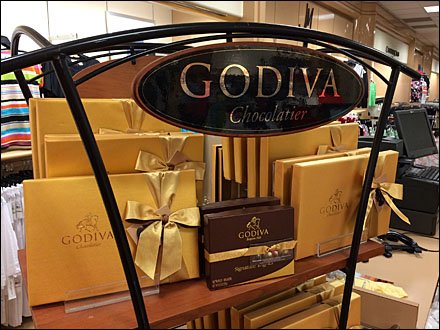 SCROLL DOWN FOR PHOTOS AND LINKS…
…to Godiva Chocolate Retail Fixtures

This Godiva Chocolate Retail Fixtures index page aggregates links
to all post and photos of the brand’s retail merchandising and outfitting.

BACKSTORY: Godiva Chocolatier is a manufacturer of premium fine chocolates and related products. Godiva, founded in Belgium in 1926, was purchased by the Turkish Yıldız Holding, owner of the Ülker Group, on November 20, 2007.[1][2][3][4] Godiva owns and operates more than 600 retail boutiques and shops in the United States, Canada, Europe, and Asia and is available via over 10,000 specialty retailers.[5]

Godiva was founded in 1926 in Brussels, Belgium, by Joseph Draps who opened his first boutique in the Grand Place in Brussels under its present name, in honour of the legend of Lady Godiva.[6] The first Godiva shop outside Belgium was opened in Paris on the fashionable Rue Saint Honoré in 1958. In 1966, the company’s products reached the United States, where they were sold at luxury strip malls. The following year, it was purchased by the Campbell Soup Company. In 1972, the first Godiva boutique in North America was opened on New York City’s Fifth Avenue.[7]

By 2007, Godiva had annual sales of approximately $500 million. In August of that year, Campbell Soup Company announced it was “exploring strategic alternatives, including possible divestiture, for its Godiva Chocolatier business”; the company said the “premium chocolate business does not fit with Campbell’s strategic focus on simple meals”.[8]

On December 20, 2007, Campbell announced that it entered into an agreement to sell Godiva to Yıldız Holding based in Istanbul, Turkey, which is the owner of Ülker group and the largest consumer goods manufacturer in the Turkish food industry.[1][9] The acquisition was completed on March 18, 2008, for $850 million.[10]

Godiva continues to own and operate more than 450 shops worldwide.[11] The company issues six seasonal mail-order catalogs a year in the USA and also accepts online and telephone orders for their products. Godiva chocolate is also sold in local malls and mini shops.

Godiva opened (May 2012) Café Godiva[12] in London’s Harrod’s Department Store. The 40-plus table venue features Godiva’s chocolate beverages, pastries, and chocolates. The company also has a store in the Harrods Food Hall.

Lawyers of the company have sent a series of letters warning the Lady Godiva public house in Geneva, Switzerland, that they are infringing upon their intellectual property with the latest asking them to cease and desist from using the name. Pru Porretta, MBE, who was behind the revival of Dame Goodyver’s Daye in Coventry, England, where a procession through the city’s streets includes her representing Lady Godiva riding a horse commented “I think it’s very sad. Godiva was a great woman who challenged her husband to stop the terrible things that were happening to the people. I’m sure Lady Godiva wouldn’t care for a company which seems to be taking something that wasn’t theirs originally and wants to use it for themselves and nobody else. It’s about our rich heritage. I would say it’s morally wrong”.[13] There is even a Boycott Godiva campaign on Facebook.[14] (SOURCE: Wikipedia)