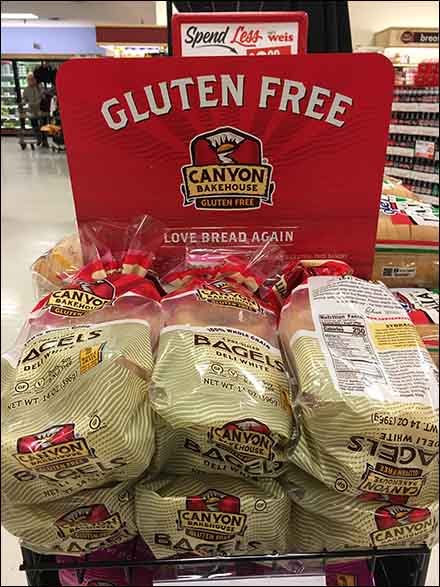 SCROLL DOWN FOR PHOTOS AND LINKS…
…to Gluten-Free Merchandising

This Gluten-Free Merchandising index page aggregates links
to all post and photos of retail merchandising, display, and outfitting
as well as deep Background courtesy of Wikipedia.

BACKSTORY: A gluten-free diet (GFD) is a diet that strictly excludes gluten, which is a mixture of proteins found in wheat (and all of its species and hybrids, such as spelt, kamut, and triticale), as well as barley, rye, and oats.[1] The inclusion of oats in a gluten-free diet remains controversial, and may depend on the oat cultivar and the frequent cross-contamination with other gluten-containing cereals.[2][3][4][5]

Gluten may cause both gastrointestinal and systemic symptoms for those with gluten-related disorders, including coeliac disease (CD), non-coeliac gluten sensitivity (NCGS), gluten ataxia, dermatitis herpetiformis (DH), and wheat allergy.[6] In these people, the gluten-free diet is demonstrated as an effective treatment,[7][8][9] but several studies show that about 79% of the people with coeliac disease have an incomplete recovery of the small bowel, despite a strict gluten-free diet.[10] This is mainly caused by inadvertent ingestion of gluten.[10] People with poor basic education and understanding of gluten-free diet often believe that they are strictly following the diet, but are making regular errors.[10][11]

In addition, a gluten-free diet may, in at least some cases, improve gastrointestinal or systemic symptoms in diseases like irritable bowel syndrome, rheumatoid arthritis, multiple sclerosis or HIV enteropathy, among others.[12] Gluten-free diets have also been promoted as an alternative treatment of people with autism, but the current evidence for their efficacy in making any change in the symptoms of autism is limited and weak.[13][14][15] (SOURCE: Wikipedia)

For all Gluten-Free Merchandising resources…