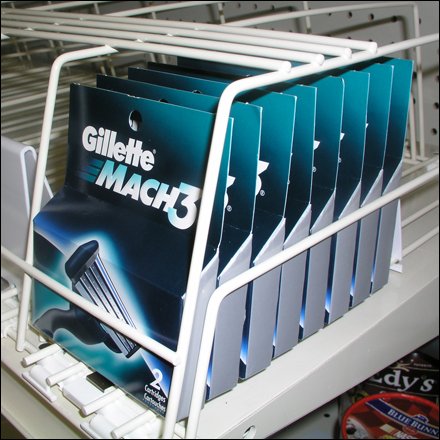 SCROLL DOWN FOR PHOTOS AND LINKS…
…to Gillette Retail Fixtures

This Gillette Retail Fixtures index page aggregates links
to all posts and photos of retail merchandising, display, and outfitting
as well as deep Background courtesy of Wikipedia.

BACKSTORY: Gillette is a brand of men’s safety razors and other personal care products including shaving supplies, owned by the multi-national corporation Procter & Gamble (P&G).

Based in Boston, Massachusetts, United States, it was owned by The Gillette Company, a supplier of products under various brands until that company merged into P&G in 2005. The Gillette Company was founded by King C. Gillette in 1901 as a safety razor manufacturer.[2]

Under the leadership of Colman M. Mockler Jr. as CEO from 1975–91, the company was the target of three takeover attempts, from Ronald Perelmanand Coniston Partners.[3] On October 1, 2005, Procter & Gamble finalized its merger with the Gillette Company.

In some languages, the brand has become the genericized trademark for all razor blades, for example in Czech (žiletka), Estonian (žilett), Latvian(žilete), Macedonian (žilét), Polish (żyletka), and Serbo-Croatian (žilet). (SOURCE: Wikipedia)