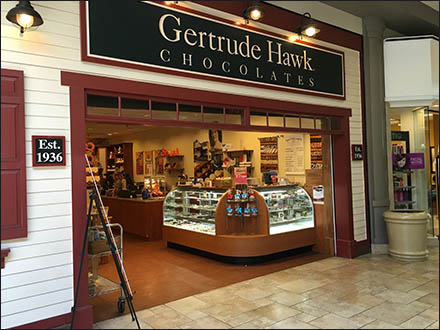 SCROLL DOWN FOR PHOTOS AND LINKS…
…to Gertrude Hawk Chocolates Displays

This Gertrude Hawk Chocolates Displays index page aggregates links
to all post and photos of retail merchandising, display, and outfitting
as well as deep Background courtesy of Wikipedia.

BACKSTORY: Gertrude Hawk Chocolates is a chocolate company based in Dunmore, Pennsylvania.

The company was started by Gertrude Jones Hawk in 1936. Hawk began her career at the age of 12 after the death of her father. She took a job in a candy shop and later began making chocolates in the kitchen of her home in Scranton, Pennsylvania. Following World War II, her son Elmer Hawk invested his service pay in the fledgling business enabling the family to purchase mechanical chocolate making equipment. The family also used their products in fundraising sales through area churches and schools.

In 1959, the Pennsylvania Department of Transportation took Gertrude’s home for an Interstate 81 bridge. The family bought a piece of land in Dunmore, Pennsylvania and built a factory there that opened in 1962. In addition to the factory, the building housed a full-service restaurant and a retail area. The restaurant was converted into a candy shop in 1973. In 1988, the company constructed the Gertrude Hawk Corporate Center. The company is now a $90 million annual business with four divisions. It employs over 1,000 people and operates 75 Gertrude Hawk Chocolates Chocolate Shops throughout Pennsylvania, New Jersey and New York.[1]

In 2018, Gertrude Hawk, the company’s founder, was inducted into the Candy Hall of Fame. (SOURCE: Wikipedia)