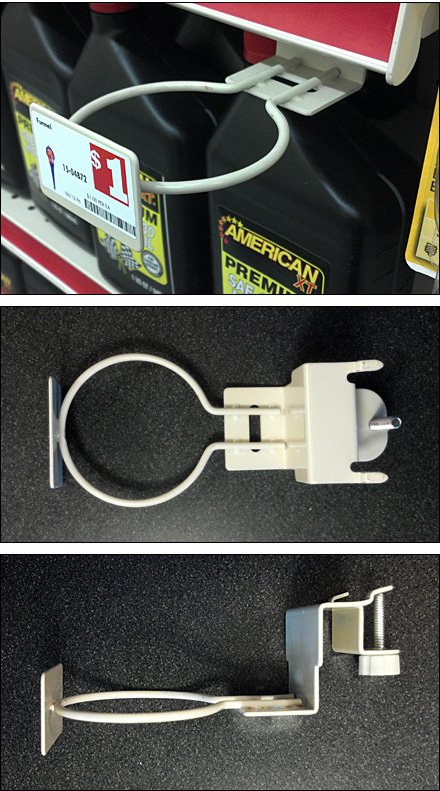 SCROLL DOWN FOR PHOTOS AND LINKS…
…to Funnel Retail Fixtures

This Funnel Retail Fixtures index page aggregates links
to all post and photos of the retail merchandising, display, and outfitting
as well as deep Background courtesy of Wikipedia.

BACKSTORY: A funnel is a pipe with a wide (often conical) mouth and a narrow stem. It is used to channel liquid or fine-grained substances into containers with a small opening. Without a funnel, spillage may occur.

Funnels are usually made of stainless steel, aluminium, glass, or plastic. The material used in its construction should be sturdy enough to withstand the weight of the substance being transferred, and it should not react with the substance. For this reason, stainless steel or glass are useful in transferring diesel, while plastic funnels are useful in the kitchen. Sometimes disposable paper funnels are used in cases where it would be difficult to adequately clean the funnel afterwards (for example, in adding motor oil to a car). Dropper funnels, also called dropping funnels or tap funnels, have a tap to allow the controlled release of a liquid. A flat funnel,[1] made of polypropylene, utilizes living hinges and flexible walls to fold flat.

The term “funnel” may refer to the chimney or smokestack on a steam locomotive and commonly refers to the same on a ship. The term funnel is also applied to other seemingly strange objects like a smoking pipe or a kitchen bin.

There are many different kinds of funnels that have been adapted for specialized applications in the laboratory. Filter funnels, thistle funnels (shaped like thistle flowers), and dropping funnels have stopcocks which allow the fluids to be added to a flask slowly. For solids, a powder funnel with a wide and short stem is more appropriate as it does not clog easily.

When used with filter paper, filter funnels, Büchner and Hirsch funnels can be used to remove fine particles from a liquid in a process called filtration. For more demanding applications, the filter paper in the latter two may be replaced with a sintered glass frit. Separatory funnels are used in liquid-liquid extractions. The Tullgren funnel is used to collect arthropods from plant litter or similar material.[2]

Glass is the material of choice for laboratory applications due to its inertness compared with metals or plastics. However, plastic funnels made of nonreactive polyethylene are used for transferring aqueous solutions. Plastic is most often used for powder funnels that do not come into contact with solvent in normal use.

To channel liquid or fine-grained substances into containers with a small opening. Used for pouring liquids or powders through a small opening and hold the filter paper in filtration.

The inverted funnel is a symbol of madness. It appears in many Medieval depictions of the mad; for example, in Hieronymus Bosch‘s Ship of Fools and Allegory of Gluttony and Lust. The Cebuano word for inverted funnel is embodo; such devices are sometimes used as timers.

In popular culture, the Tin Woodman in L. Frank Baum‘s novel The Wonderful Wizard of Oz (and in most dramatizations of it) uses an inverted funnel for a hat, though that is never specifically mentioned in the story—it originated in W. W. Denslow‘s original illustrations for the book.

In the East Coast of the United States, “beer funnel” is another term for “beer bong”. “Funneling” a beer involves pouring an entire beer into a funnel attached to a tube, in which a person then consumes the beer via the tube.

In the computing world, a funnel is frequently used as the icon for the filter functionality.  (SOURCE: Wikipedia)

EDITOR’S NOTE: Funnel Retail Fixtures
Topmost posts may be scheduled but not yet live.
Please click further down the list if necessary.