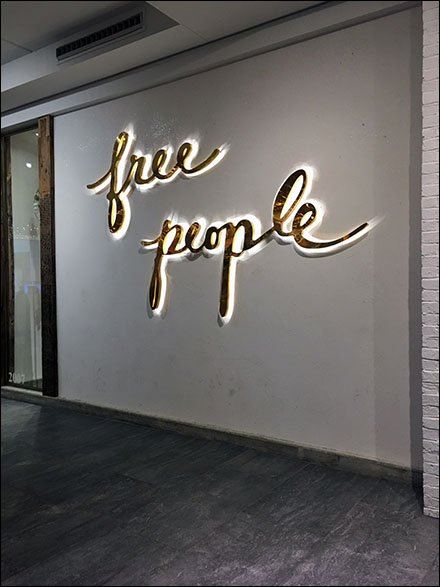 SCROLL DOWN FOR PHOTOS AND LINKS…
…to Free People Retail Fixtures

This Free People Retail Fixtures index page aggregates links
to all post and photos of the brand’s retail merchandising and outfitting.

In the early 1970s, Richard Hayne opened a store in West Philadelphia, Pennsylvania with his first wife, Judy Wicks, and named it Free People. His store attracted the young people who lived and shopped in the area. When his store’s popularity grew, he opened a second store and he changed its name from Free People to Urban Outfitters. Urban Outfitters’ business began to grow rapidly. Dick’s wife, Meg, oversaw the development of Urban Outfitters’ private label division, which supported product exclusive to Urban Outfitters. This proved to be quite successful, in 1984 the wholesale line “Free People” was back in action.[2] In the fall of 2002, the first Free People Boutique opened in Paramus, New Jersey. Since the first boutique opened in Paramus, New Jersey, there are now boutiques all over the United States as well as Canada.[3] Free People developed an app which allows users to shop and to upload their own looks and pictures wearing Free People clothing and products.

In 2006, “Free People” partnered with Edward Mullen Studio to design an e-commerce strategy. “Free People” is a constantly changing and evolving brand. Their goal is to promote creativity, travel, and neat style.[4] Along with serving as URBN’s chief creative officer, Margaret Hayne is also currently chief executive of Free People.[5] Its first brick-and-mortar store opened in Paramus, New Jersey in 2002.[6] In the first six months of 2013, sales topped $180 million, an increase over the $135 million in 2012; the company’s use of big data and social commerce were factors in its sales growth.[7] In 2014 Free People China website was launched.

Free People has a total of 124 boutiques across the United States and Canada.[8] Free People operates four wholesale showrooms located in New York City, Los Angeles, Chicago and the United Kingdom. There are shows every month.[9]

On May 24, 2016 Free People partnered with Girls Inc., this partnership has developed the brand more. It is a charity-driven social campaign. The campaign supports over 140,000 innovative, confident, strong, and smart girls across the U.S. and Canada to succeed. Free People contributes by sending several women each month that they think best spread Girls Inc. across their social media channels, by giving a donation and sending them Free People apparel. Free People gives away cloth bags, whenever someone re-uses or does not accept the cloth bag at check out Free People donates .25 cents to Girls Inc.[10]

For all Free People Retail Fixtures and Merchandising Resources see…