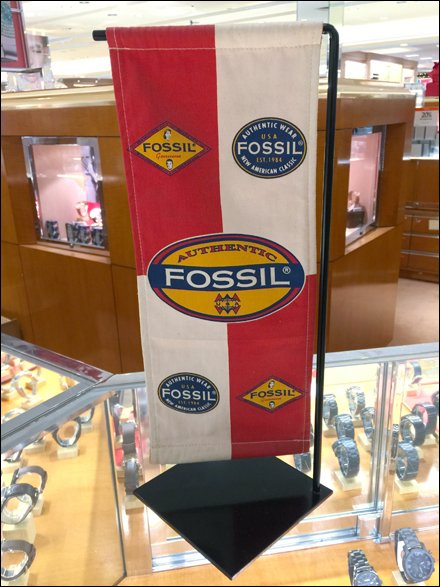 This Fossil Retail Fixtures and Displays index page aggregates links
to all post and photos of the brand’s retail merchandising and outfitting.

CEO Kosta Kartsotis owns approximately 12% of Fossil stock. The company name represents the nickname the brothers had for their father.[6]

Fossil was founded in 1984 as Overseas Products International by Tom Kartsotis, a former Texas A&M University student living in Dallas from a suggestion by his older brother, Kosta Kartsotis, a merchandising executive at Sanger-Harris. Kosta told his younger brother about the potential large profits that could be made in importing retail goods made in the Far East, specifically in importing moderately-priced fashion watches.[1] Their main product was fashion watches with a retro look. In 1990, they introduced leather goods under the Fossil brand, and the Relic line of watches.

Zodiac Watches was a Swiss brand that had been operating since 1882 when Fossil acquired it from Genender International in 2001 for $4.7 million.[8] Fossil’s desire to establish a Swiss presence led to the purchase of the Zodiac Watch brand and a complete retooling of that line to reflect a retro modern 1970s style in a higher end watch. The 2004 purchase of Michele Watch completed the cycle by offering a high-end Swiss watch with a designer flair.

In September 2007, Fossil was accused of infringing a patent owned by Financial Innovations Systems, LLC, in a lawsuit filed in the Northern District of Texas. The case was settled for an undisclosed amount and dismissed shortly thereafter.[9]

The Watch Station International chain was purchased from Luxottica/Sunglass Hut in December 2007.[10]

Fossil has design studios in Biel, Switzerland close to Rolex as well as manufacturing facilities in China and distribution centers in Dallas, Germany, and Asia.[11]

In 2012 Fossil, Inc. agreed to purchase Skagen Designs, Ltd. and some of its partners for approximately $225 million in cash and 150,000 Fossil shares. The total value paid by Fossil would be approximately $236.8 million.[12][13] In early 2013, Fossil introduced their upscale and more expensive “Fossil Swiss” line of watches which are made in Switzerland.[14][15] In November 2015, Fossil acquired Misfit for $260 million, with plans to incorporate Misfit’s technology into traditional-looking watches.[16]

In 2016, Fossil won Fashion Tech Collection of the Year for their connected designer smartwatches and jewelry. Their analog smartwatches and connected jewelry span across their licensing brands such as Diesel, Armani, Michael Kors, and Kate Spade.[24] (SOURCE: Wikipedia)

EDITOR’S NOTE: Fossil Retail Fixtures and Displays
Topmost posts may be scheduled but not yet live.
Please click further down the list if necessary.

For all Fossil Retail Fixtures and Displays resources see…