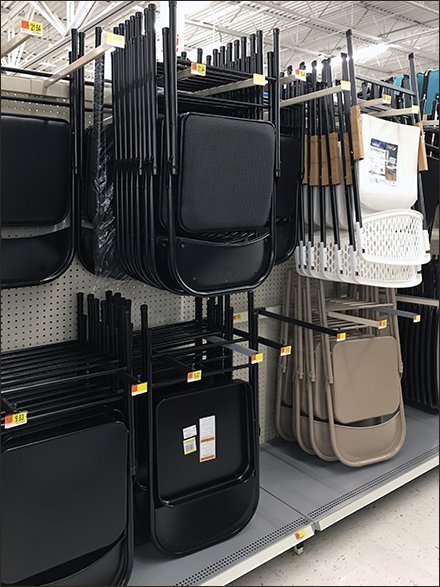 SCROLL DOWN FOR PHOTOS AND LINKS…
…to Folding Chair Merchandising

This Folding Chair Merchandising index page aggregates links
to all post and photos of retail merchandising, display, and outfitting
as well as deep Background courtesy of Wikipedia.

BACKSTORY:A folding chair is a type of folding furniture, a light, portable chair that folds flat or to a smaller size, and can be stored in a stack, in a row, or on a cart. It can be combined with a folding table.

Folding chairs or stools were used as seating in the Mediterranean area in the 15th-13th century BC. The chairs were also used as grave goods in the richest graves. A folding chair of ebony and ivory with gold fittings was found in Tutankhamun’s tomb in Egypt.

Folding chairs were already used in the Nordic Bronze Age, Ancient Egypt, Minoan Greece and Ancient Rome. The frame was mostly made of wood, and seldom made of metal. The wood was inlaid with artistic carvings, gilded, and decorated with ivory. In Northern Europe, the remains of more than 18 folding chairs are known dating back to the Nordic Bronze Age such as the Daensen folding chair and the Guldhøj chair, found near Vamdrup, Denmark.

The folding chair became especially widespread during the Middle Ages. It was treasured as a liturgical furniture piece. Since the 15th and 16th centuries the folding chair has mostly had arm and head rests. Of course, newer chairs which are often found at functions and events are also called folding chairs. They are portable and easy to use.

In the United States, an early patent for a folding chair was by John Cham in 1855.[2] In 1947, Fredric Arnold created the first aluminum folding chair with fabric strapping for the seat and back. By 1957, the Fredric Arnold Company of Brooklyn, New York, was manufacturing more than 14,000 chairs per day. Today, the folding chair is mostly made of hard plastic or metal or wood. Folding chairs can be divided into different categories.

In the mid 1980s, folding chairs were used in professional wrestling as weapons, mainly by World Wrestling Entertainment. The investigation into Chris Benoit’s death cited Chronic traumatic encephalopathy, which is often caused by chair shots to the head and other related concussions as a leading cause of his symptoms, leading to a ban in the WWE on chair shots to the head are now banned in the WWE, and the use of chairs was toned down to prevent related injuries. (SOURCE: Wikipedia)

For all Folding Chair Merchandising resources…