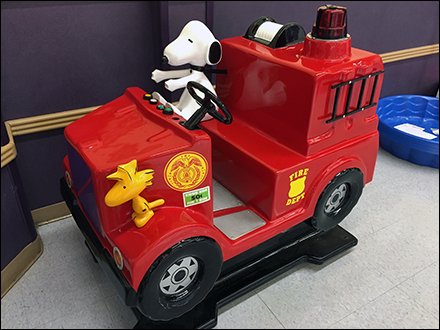 This Fire / Fire Alarms / Fire Extinguishers index page aggregates links
to all post and photos of retail merchandising, display, and outfitting
as well as deep Background courtesy of Wikipedia.

BACKSTORY: Fire is the rapid oxidation of a material in the exothermic chemical process of combustion, releasing heat, light, and various reaction products.[1] Slower oxidative processes like rusting or digestion are not included by this definition.

Fire is hot because the conversion of the weak double bond in molecular oxygen, O2, to the stronger bonds in the combustion products carbon dioxide and water releases energy (418 kJ per 32 g of O2); the bond energies of the fuel play only a minor role here.[2] At a certain point in the combustion reaction, called the ignition point, flames are produced. The flame is the visible portion of the fire. Flames consist primarily of carbon dioxide, water vapor, oxygen and nitrogen. If hot enough, the gases may become ionized to produce plasma.[3] Depending on the substances alight, and any impurities outside, the color of the flame and the fire’s intensity will be different.

Fire in its most common form can result in conflagration, which has the potential to cause physical damage through burning. Fire is an important process that affects ecological systems around the globe. The positive effects of fire include stimulating growth and maintaining various ecological systems. (SOURCE: Wikipedia)

BACKSTORY: A fire alarm system has a number of devices working together to detect and warn people through visual and audio appliances when smoke, fire, carbon monoxide or other emergencies are present. These alarms may be activated automatically from smoke detectors, and heat detectors or may also be activated via manual fire alarm activation devices such as manual call points or pull stations. Alarms can be either motorized bells or wall mountable sounders or horns. They can also be [(speaker strobes]) which sound an alarm, followed by a voice evacuation message which warns people inside the building not to use the elevators. Fire alarm sounders can be set to certain frequencies and different tones including low, medium and high, depending on the country and manufacturer of the device. Most fire alarm systems in Europesound like a siren with alternating frequencies. Fire alarm electronic devices are known as horns in the United States and Canada, and can be either continuous or set to different codes. Fire alarm warning devices can also be set to different volume levels.  (SOURCE: Wikipedia)

BACKSTORY: A fire extinguisher is an active fire protection device used to extinguish or control small fires, often in emergency situations. It is not intended for use on an out-of-control fire, such as one which has reached the ceiling, endangers the user (i.e., no escape route, smoke, explosion hazard, etc.), or otherwise requires the expertise of a fire brigade. Typically, a fire extinguisher consists of a hand-held cylindrical pressure vessel containing an agent which can be discharged to extinguish a fire. Fire extinguishers manufactured with non-cylindrical pressure vessels also exist but are less common.

There are two main types of fire extinguishers: stored-pressure and cartridge-operated. In stored pressure units, the expellant is stored in the same chamber as the firefighting agent itself. Depending on the agent used, different propellants are used. With dry chemical extinguishers, nitrogen is typically used; water and foam extinguishers typically use air. Stored pressure fire extinguishers are the most common type. Cartridge-operated extinguishers contain the expellant gas in a separate cartridge that is punctured prior to discharge, exposing the propellant to the extinguishing agent. This type is not as common, used primarily in areas such as industrial facilities, where they receive higher-than-average use. They have the advantage of simple and prompt recharge, allowing an operator to discharge the extinguisher, recharge it, and return to the fire in a reasonable amount of time. Unlike stored pressure types, these extinguishers use compressed carbon dioxide instead of nitrogen, although nitrogen cartridges are used on low temperature (-60 rated) models. Cartridge operated extinguishers are available in dry chemical and dry powder types in the U.S. and in water, wetting agent, foam, dry chemical (classes ABC and B.C.), and dry powder (class D) types in the rest of the world.

Wheeled fire extinguisher and a sign inside a parking lot

No Smoking Unless You’re On Fire

“No Smoking: Target® Fireworks Sale”
“Liquor and Fireworks On Sale”
“No Smoking Unless You Are On Fire“