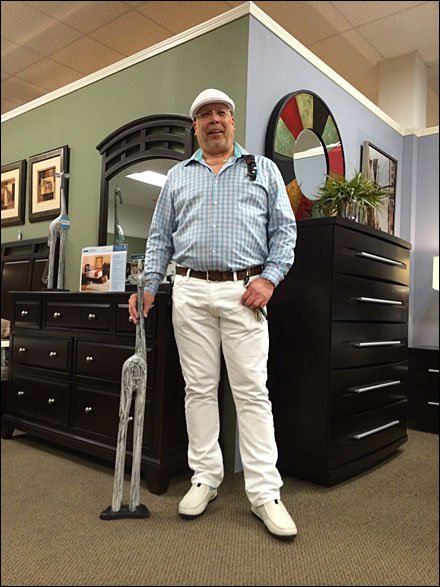 SCROLL DOWN FOR PHOTOS AND LINKS…
…to Ferragamo Retail Fixtures

This Ferragamo Retail Fixtures index page aggregates links
to all post and photos of the brand’s retail merchandising and outfitting.

BACKSTORY: Salvatore Ferragamo S.p.A. [salvaˈtoːre ferraˈɡaːmo] is an Italian luxury goods company, with headquarters in Florence, specializing in shoes,[2] leather goods, and ready-to-wear for men and women. It is the parent company of the Ferragamo Group. The company also licences eyewear and watches.

With about 4,000 employees and a network of over 660 mono-brand stores, the Ferragamo Group runs operations in Italy and worldwide, which provide the brand with a broad footprint in Europe, America and Asia.

Salvatore Ferragamo emigrated from southern Italy to Boston and then California in 1914. He opened the Hollywood Boot Shop in 1923, and made shoes[2] for movie stars such as Joan Crawford and Gloria Swanson, as well as for films such as Cecil B. DeMille‘s The Ten Commandments.[3] He returned to Italy and set up a shoe shop in Florence in 1927.[4] However, the modern shoemaking company regards 1928 as the date of its foundation and so celebrated its 80th anniversary in 2008.[3] Salvatore filed for bankruptcy in 1933,[citation needed] during the Great Depression, but by 1938 he was in a position to buy the Palazzo Spini Feroni, one of the great palaces of Florence,[3] which now houses the company’s flagship store and a museum dedicated to Ferragamo’s life and work.

The company flourished after World War II, expanding the workforce to 700 craftsmen producing 350 pairs of hand-made shoes a day.[citation needed] After Salvatore’s death in 1960, his widow Wanda took over the running of the business and expanded its operations to include eyewear, perfume, belts, scarves,[4] bags, watches, and a ready to wear clothing line.

The company is currently owned by the Ferragamo family, which in November 2006 included Salvatore’s widow Wanda, five children, 23 grandchildren and other relatives.[5] There is a rule that only 3 members of the family can work at the company, prompting fierce competition.[5] To ease these tensions, in September 2006, the family announced a plan to float 48% of the company on the stock market, and since October 2006 Michele Norsa has served as managing and general director.[4] However, as of January 2008, this plan may be on put on hold in the midst of the downturn in the financial market.[6] If the listing on the stock market proceeds, the fund will be directed primarily towards building its positions in China.[7] The company is holding its 80th birthday exhibition in Shanghai.[3]

In 2011 the company was listed on the stock exchange.[8] For the fiscal year 2016, Salvatore Ferragamo reported preliminary consolidated revenues of 1,438 million euros. As of December 31, 2016, the Salvatore Ferragamo Group’s retail network consisted of 402 directly operated stores (DOS), while the wholesale and travel retail channel included 281 third party operated stores (TPOS), as well as presence in major department stores and high-end multi-brand specialty stores.[9]

On August 2, 2016 Eraldo Poletto was appointed as new CEO of the group.

Throughout its history, the company has been known for innovative designs and use of materials. Such ingenuity goes back to Salvatore’s time in California, when he studied anatomy to make shoes which were more comfortable. Notable innovations include the wedge heel, the shell-shaped sole, the ‘invisible’ sandal, metal heels and soles, the 18-carat gold sandal, the sock-shoe, sculpture heels, and the gloved arch shoe created for the Maharani of Cooch Behar in 1938.[3] Metal-reinforced stiletto heels were made famous by Marilyn Monroe.[4] The company is also known for the ‘Gancini’ decoration, the ‘Vara’ patent ballet pump, the Salvatore bag and the use of patchwork.[3] It makes also eyewear and watches in partnership with Marchon and Timex Group.

Salvatore worked with film stars and celebrities from his earliest days in Hollywood. Clients over the years included Audrey Hepburn, Sophia Loren and Greta Garbo,[4] as well as Andy Warhol, Grace Mugabe and Diana, Princess of Wales.[3] The company made Margaret Thatcher‘s famous handbags[7] and for King Jigme Khesar Namgyal Wangchuckduring the coronation on November 6, 2008 in Thimpu, Bhutan. (SOURCE: Wikipedia)

For Ferragamo posts by title…

For Ferragamo on foot see…

For all Ferragamo merchandising see…