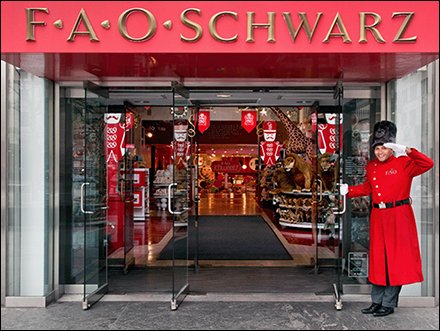 SCROLL DOWN FOR PHOTOS AND LINKS…
…to FAO Schwarz Retail Fixtures

This FAO Schwarz Retail Fixtures index page aggregates links
to all post and photos of the brand’s retail merchandising and outfitting.

BACKSTORY: FAO Schwarz, founded in 1862, was once the oldest toy store in the United States.[1] The company is known for its unique high-end toys, life-sized stuffed animals, dolls, and games.[2] The FAO Schwarz flagship store on Fifth Avenue in New York City was a popular tourist destination, and has gained iconic status for its floor piano and cameos in major motion pictures.[1] The store closed in July 2015 after parent company Toys “R” Us announced it was giving up the lease nearly two years early to save money.[3]

The FAO Schwarz brand is currently the property of the descendants of the founder through the FAO Schwarz Family Foundation[4] but is now exclusively operated by ThreeSixty Group.

FAO Schwarz was founded in 1862 under the name “Toy Bazaar” by German immigrant Frederick August Otto Schwarz, in Baltimore, where he and his brothers retailed toys from a fancy-goods store. Additional locations of “Toy Bazaar” followed in Philadelphia and Boston.

Beginning in November 1869, the Schwarz Toy Bazaar held an exhibition of toys that would be available for the Christmas season, which in 1883 was described as the “14th Annual Exhibition.” [6] In 1896, Schwarz proclaimed the store as the “Original Santa Claus Headquarters” in New York.[7] The FAO Schwarz holiday catalog has been published annually since 1876.[8][9]

In 1889, Schwarz added his initials to newspaper advertisements, branding the store at that time as simply “F.A.O. Schwarz,” although the “Toy Bazaar” identifier continued until the move in 1897 to W. 23rd Street.[5] In 1931, the New York City location moved to 745 Fifth Avenue where it operated for 55 years.

In 1963, when the Schwarz family sold their last shares in the business, FAO Schwarz went through a series of owners beginning with Parents Magazine. The company was subsequently sold to W.R. Grace in 1970, and then to toy retailer Franz Carl Weber of Zurich, Switzerland, in 1974. In 1985, Christiana Companies, a San Diego, California based company, owned FAO Schwarz for just one year. In 1986, Peter Harris, with the help of Philadelphian investment banker, Peter Morse, bought the company under Morse Partners Ltd. and moved the toy store across 58th Street to its current location in the General Motors Building at 767 Fifth Avenue at 58th Street. FAO Schwarz was sold to Netherlands-based NV Koninklijke Bijenkorf Beheer (later renamed Vendex/KBB) in 1990. Throughout the 1990s, new FAO Schwarz stores opened throughout the United States and by 2000 the company had 40 locations.[10]

In 2001, Right Start, Inc. purchased 23 of the 42 stores from Vendex, including the famed FAO Schwarz Fifth Avenue flagship store. The other 18 unsold locations were immediately closed.[11] In 2002, Right Start Inc. changed its corporate name to FAO Inc. operating stores under The Right Start, Zany Brainy and FAO Schwarz names.[12] In January 2003, FAO Inc. filed for bankruptcy,[13] yet emerged from bankruptcy in April 2003. The company filed for bankruptcy a second time in December 2003.[14] The Fifth Avenue store was closed in January 2004.[15] (SOURCE: Wikipedia)

EDITOR’S NOTE: FAO Schwarz Retail Fixtures
Topmost posts may be scheduled but not yet live.
Please click further down the list if necessary.