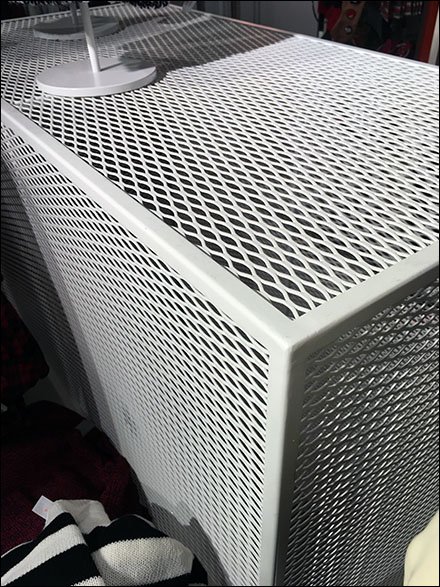 SCROLL DOWN FOR PHOTOS AND LINKS…
…to Expanded Metal Display Fixtures

This Expanded Metal Display Fixtures index page aggregates links
to all post and photos of retail merchandising, display, and outfitting
as well as deep Background courtesy of Wikipedia.

BACKSTORY: Expanded metal is a type of sheet metal which has been cut and stretched to form a regular pattern (often diamond-shaped) of metal mesh-like material. It is commonly used for fences and grates, and as metallic lath to support plaster or stucco.

Some commonly used shapes are circles, squares, and diamonds; diamonds are the most popular shapes because of how well the shape absorbs energy and resists mechanical deformation after installation. Other design considerations are the size and angles of the shapes, which will also affect how well the metal absorbs energy and where the energy is spread throughout the expanded metal.[2]

For the diamond shape, there are at least four different angles that come into account, the two acute and two obtuse angles.[3] The larger the angles, the less strength the shape will have because there would be too much space inside the shape. However, if the angles are too small, strength is lost because the shape is too close together, so there is no space for the structure to hold.

The angle in which the shapes are laid also plays a significant role. If the angle is zero the ends of the shape point to the start and the end of the sheet, making straight lines across the sheet of diamonds. This option provide the most strength when it comes to compressing the sheet on its side. This can even take more pressure than a solid piece of metal because the sheet will compress and spread the pressure throughout the sheet.[3] The other four commonly used angles are 60º, 90º, 90º plus 60º, and 60º plus 90º. A 60º angle puts the diamond diagonal at the start and end to the sheet. A 90º angle makes the diamond vertical to the start and the end of a sheet.[3] The 90º plus 60º and 60º plus 90º angles combine both a 60º angle and a 90º angle; the order of the angles is respective to the order in naming. (SOURCE: Wikipedia)