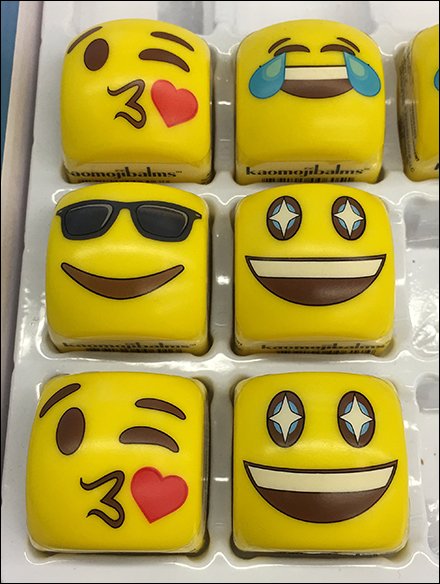 SCROLL DOWN FOR PHOTOS AND LINKS…
…to Emojis In Retail Merchandising

This Emojis In Retail Merchandising index page aggregates links
to all post and photos of retail merchandising, display, and outfitting
as well as deep Background courtesy of Wikipedia.

BACKSTORY: An emoji (/ɪˈmoʊdʒiː/ i-MOH-jee; plural emoji or emojis[1]) is a pictogram, logogram, ideogram or smiley used in electronic messages and web pages. The primary function of emoji is to fill in emotional cues otherwise missing from typed conversation.[2] Some examples of emoji are 😂, 😃, 🧘🏻‍♂️, 🌍, 🍞, 🚗, 📞, 🎉, ❤️, 🍆, and 🏁. Emoji exist in various genres, including facial expressions, common objects, places and types of weather, and animals. They are much like emoticons, but emoji are pictures rather than typographic approximations; the term “emoji” in the strict sense refers to such pictures which can be represented as encoded characters, but it is sometimes applied to messaging stickers by extension.[3] Originally meaning pictograph, the word emoji comes from Japanese e (絵, ‘picture’) + moji (文字, ‘character’); the resemblance to the English words emotion and emoticon is purely coincidental.[4] The ISO 15924 script code for emoji is Zsye.

Originating on Japanese mobile phones in 1997, emoji became increasingly popular worldwide in the 2010s after being added to several mobile operating systems.[5][6][7] They are now considered to be a large part of popular culture in the West and around the world.[8][9] In 2015, Oxford Dictionaries named the Face with Tears of Joy emoji (😂) the word of the year.[10][11] (SOURCE: Wikipedia)

For all Emojis In Retail Merchandising resources…