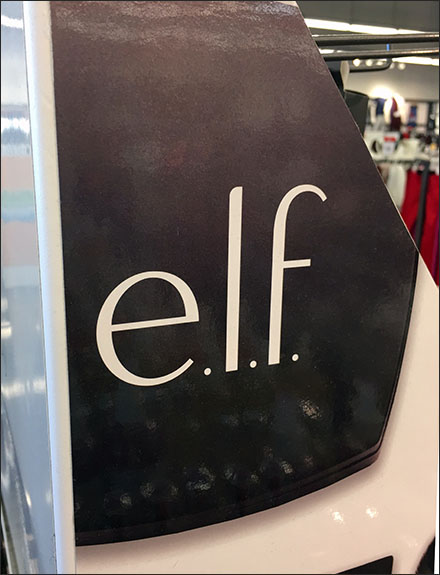 SCROLL DOWN FOR PHOTOS AND LINKS…
…to Elf Cosmetics Merchandising Displays

This Elf Cosmetics Merchandising Displays index page aggregates links
to all post and photos of retail merchandising, display, and outfitting
as well as deep Background courtesy of Wikipedia.

BACKSTORY: e.l.f. Cosmetics is an American cosmetics brand based in Oakland, California. It was founded by Joseph Shamah and Scott Vincent Borba in 2004.[5] Items include bath and skin-care products, mineral-based makeup, professional tools,[4] eyeliners, lipstick, glosses,[6][7] blushes, bronzers, brushes, and mascara, among others.[8]

According to the company, its products are 100% “cruelty-free“, and it supports PETA‘s no fur campaign.[9] e.l.f. Cosmetics’ products have been reviewed in Glamour, Allure, Self,[7] InStyle, and Good Housekeeping,[2] and are sold in 17 countries, and in several stores including Target,[10] Kmart,[7] Dollar General,[5] and Walmart.[8] Over half the company’s sales come from its website, which doubles as a social networking site with over two million members.[11]

e.l.f. (short for EyesLipsFace[12]) Cosmetics was founded by Joseph Shamah and Scott Vincent Borba in June 2004 with the assistance of Shamah’s father, Alan.[3][5][12]The duo originally met at a party in 2002; Shamah was a 23-year-old New York University business student. Borba was a 31-year-old Los Angeles beauty-industry veteran, responsible for previously launching brands such as Hard Candy cosmetics.[3] Both were enthusiastic about an inexpensive, high-quality cosmetics line for women, and decided to form a company together. A few days after the party they sat down to brainstorm, and a business plan was created within months. Borba claims the idea originated from seeing women with expensive cars such as BMWs and Mercedes-Benzes buying bargain-price cosmetics at 99-cent stores in Los Angeles.[2]

On February 3, 2014, TPG Growth bought a majority stake in e.l.f. Cosmetics.[1] Joey Shamah was replaced by Tarang P. Amin, who “has been appointed president, chief executive officer and director of e.l.f. Cosmetics”.[1]

e.l.f. Cosmetics is currently available in 18 countries including the United States, Canada, Australia, United Kingdom , Saudi Arabia, France, Colombia, and Spain.[5][10]Products can be purchased at regional drug chains across the United States and Canada.[2] e.l.f products are most commonly found in Target. In March 2010, e.l.f.’s $1 and Studio line of products were placed in over 700 Target stores,[10] with most individual items prices at $1 and $3.[8] Another Target expansion to include most outlets happened in March 2011.[8] Other stores include Kmart,[7] Dollar General,[5] and Walmart.[8] e.l.f. is also sold at various supermarkets and women’s apparel discount retailers, often in four-tiered spinners or “fish bowls” in impulse-buy sections.[4] (SOURCE: Wikipedia)