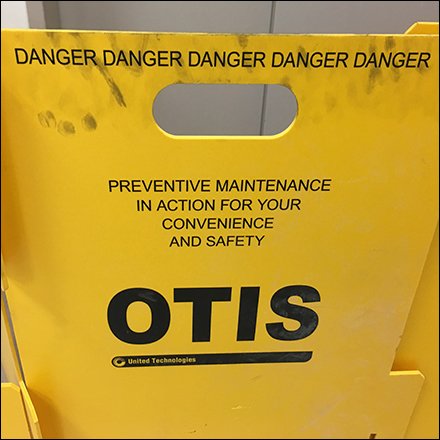 Elevator Outfitting and Signage Backstory: An elevator (US and Canada) or lift (UK, Australia, Ireland, New Zealand, and South Africa) is a type of vertical transportationthat moves people or goods between floors (levels, decks) of a building, vessel, or other structure. Elevators/lifts are generally powered by electric motors that either drive traction cables and counterweight systems like a hoist, or pump hydraulic fluid to raise a cylindrical piston like a jack.

In agriculture and manufacturing, an elevator/lift is any type of conveyor device used to lift materials in a continuous stream into bins or silos. Several types exist, such as the chain and bucket elevator, grain auger screw conveyor using the principle of Archimedes’ screw, or the chain and paddles or forks of hay elevators. Languages other than English may have loanwords based on either elevator or lift. Because of wheelchair access laws, elevators/lifts are often a legal requirement in new multistory buildings, especially where wheelchair ramps would be impractical.

The earliest known reference to an elevator is in the works of the Roman architect Vitruvius, who reported that Archimedes (c. 287 BC – c. 212 BC) built his first elevator probably in 236 BC. Some sources from later historical periods mention elevators as cabs on a hemp rope powered by hand or by animals.

In 1000, the Book of Secrets by al-Muradi in Islamic Spain described the use of an elevator-like lifting device, in order to raise a large battering ram to destroy a fortress. In the 17th century the prototypes of elevators were located in the palace buildings of England and France. Louis XV of France had a so-called ‘flying chair’ built for one of his mistresses at the Chateau de Versailles in 1743.

Ancient and medieval elevators used drive systems based on hoists or winders. The invention of a system based on the screw drive was perhaps the most important step in elevator technology since ancient times, leading to the creation of modern passenger elevators. The first screw drive elevator was built by Ivan Kulibin and installed in Winter Palace in 1793. Several years later another of Kulibin’s elevators was installed in Arkhangelskoye near Moscow.

In 1852, Elisha Otis introduced the safety elevator, which prevented the fall of the cab if the cable broke. The design of the Otis safety elevator is somewhat similar to one type still used today. A governor device engages knurled roller(s), locking the elevator to its guides should the elevator descend at excessive speed. He demonstrated it at the New York exposition in the Crystal Palace in a dramatic, death-defying presentation in 1854, and the first such passenger elevator was installed at 488 Broadway in New York City on March 23, 1857. Founded more than 160 years ago by the inventor of the safety elevator, Otis has more than 1.9 million elevators in operation worldwide. The Otis Elevator Company claims that its products carry the equivalent of the world’s population every five days. The company pioneered the development of the “safety elevator”, invented by Elisha Otis in 1852, which used a special mechanism to lock the elevator car in place should the hoisting ropes fail.

The first elevator shaft preceded the first elevator by four years. Construction for Peter Cooper‘s Cooper Union Foundation building in New York began in 1853. An elevator shaft was included in the design, because Cooper was confident that a safe passenger elevator would soon be invented. The shaft was cylindrical because Cooper thought it was the most efficient design. Later, Otis designed a special elevator for the building. Today the Otis Elevator Company, now a subsidiary of United Technologies Corporation, is the world’s largest manufacturer of vertical transport systems.

The Equitable Life Building completed in 1870 in New York City was thought to be the first office building to have passenger elevators. However Peter Ellis and English architect installed the first elevators that could be described as paternoster lifts in Oriel Chambers in Liverpool in 1868. (SOURCE: Wikipedia).

This Index of Elevator Outfitting and Signage covers all similar equipment seen across retail.

Elevator Directionals Use No Numbers

For All Elevator Outfitting and Signage see…