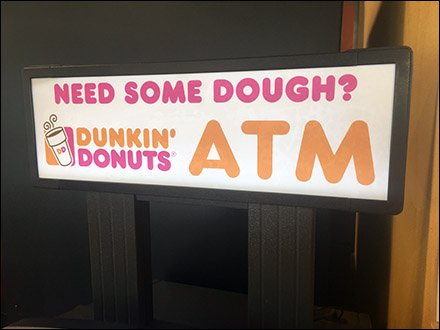 SCROLL DOWN FOR PHOTOS AND LINKS…
…to Dunkin’ Donuts Retail Fixtures

This Dunkin’ Donuts Retail Fixtures index page aggregates links to all post and photos of the brand’s retail merchandising and outfitting.

BACKSTORY: Dunkin’ Donuts is an American global donut company and coffeehouse based in Canton, Massachusetts, in Greater Boston. It was founded in 1950 by William Rosenberg in Quincy, Massachusetts.[2] Since its founding, the company has grown to become one of the largest coffee and baked goods chains in the world, with more than 12,000 restaurants in 36 countries.[3][4] The chain’s products include donuts, bagels, other baked goods, and a wide variety of hot and iced beverages.[5][6]

In 1963, Rosenberg’s son Robert became CEO of the company at the age of 25. In that same year, Dunkin’ Donuts opened its 100th location. Dunkin’ Donuts was at the time a subsidiary of Universal Food Systems, a portfolio of 10 small food service businesses.[9] And Dunkin’ Donuts locations varied greatly, with some selling full breakfasts and other food and others serving only donuts and coffee.

In the following years, the other businesses in the Universal Food Systems portfolio were sold or closed, and the company was renamed to Dunkin’ Donuts. The menu and shop format were standardized, and various new menu items were introduced. In 1990, Allied Lyons, which already owned Baskin-Robbins, purchased Dunkin’ Donuts, and the two restaurants merged operations.[10] By 1998, the brand had grown to 2,500 locations worldwide with $2 billion in annual sales. In 2004, the company’s headquarters were relocated to Canton, and in December 2005, Dunkin’ Donuts and Baskin-Robbins were sold as Dunkin’ Brands to a consortium of three private-equity firms: Bain Capital Partners, the Carlyle Group and Thomas H. Lee Partners.

in 2006, Dunkin’ Donuts began using the slogan “America Runs on Dunkin'” which continues to be used in many advertisement campaigns.[11] By 2010, Dunkin’ Donuts’ global system-wide sales were $6 billion.[12] In 2012, Dunkin’ Donuts launched an application for payment and gifting for iPhone, iPod touch, and Android smartphones.[13]

Dunkin’ Donuts has several varieties of donuts.[5][6] Other bakery goods and sandwiches include bagels, cookies, muffins, donut holesunder the brand name “Munchkins”, oven-toasted sandwiches under the brand name “Big N’ Toasted”, and a glazed donut breakfast sandwich. However, only 8% of the chain’s sales are donuts; 65% are drinks, and 27% are other food items.[14] Hot drinks include coffee, tea and hot chocolate; cold drinks include iced tea and “Coolatta”, which is an iced drink served since 1997, flavored either with coffee and cream, or as a slush, made with fruit juice.[15][16] There are also ice coffees, lattes, and macchiatos that can have flavors such as caramel, hazelnut, and vanilla added to them. Seasonal flavors are also presented to customers for a certain duration of time. During the fall, customers can also choose pumpkin or salted caramel as a flavor. During the winter, customers can have peppermint hot chocolate.[17]

Since October 18, 2007, Dunkin’ Donuts locations in the United States have reduced trans fats from their menu items by switching to a blend of oils: palm, soybean and cottonseed.[18] International locations are expected to adopt the change over time.[19] The DDSmartmenu features items that are reduced no less than 25 percent of any one of the following: calories, fat, saturated fat, sugar, or sodium.[citation needed]  As of May 2015, the Dunkin’ Donuts website claimed “there are countless steps involved in producing coffee.”[20] (SOURCE: Wikipedia)

This Dunkin’ Donuts Retail Fixtures index page aggregates links to all post and photos of the brand’s retail merchandising and outfitting.

For all Dunkin’ Donuts and Baskin Robbins resources see…