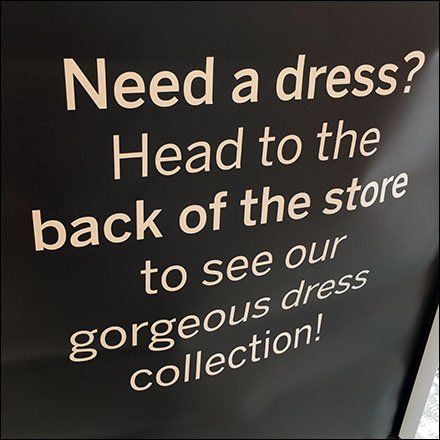 SCROLL DOWN FOR PHOTOS AND LINKS…
…to Dress Barn Retail Fixtures

This Dress Barn Retail Fixtures index page aggregates links
to all post and photos of retail merchandising, display, and outfitting
as well as deep Background courtesy of Wikipedia.

BACKSTORY: Ascena Retail Group, Inc. (formerly Dress Barn and doing business as Dressbarn) is an American retailer of women’s clothing. Ascena also owns the Maurices, Justice, Lane Bryant, and Catherines clothing store brands, and is the parent company of Ann Inc., operator of Ann Taylor and Loft stores. Chairman Elliot Jaffe and his wife and co-founder, Roslyn own about 25% of Ascena.

The first Dress Barn was opened in February 1962 in Stamford, Connecticut, by Roslyn Jaffe. Jaffe saw the opportunity to provide wear-to-work dresses and clothing for the working woman during a time in the U.S. when women were entering the workforce in greater numbers and there were few options for buying more stylish and affordable workplace women’s clothing.

The company began trading on NASDAQ (symbol DBRN) in 1982. In January 2011, to reflect the company’s broader holdings,[5] the company was reorganized as a Delaware corporation named Ascena Retail Group, Inc.[2] At this time the NASDAQ symbol was also changed to ASNA.[6]

In 2009, Ascena Retail Group expanded into the girls’ clothing market by purchasing Tween Brands, the owner of the Justice chain of 891 stores. Justice, which is aimed at girls between ages 7 and 14, is the successor of Limited Too, originally launched in 1987 by The Limited to serve the same market. In 1999, The Limited spun off Limited Too as a separate company. In 2004, Limited Too launched the Justice chain, aimed at a lower price point in the same market. Limited Too changed its name to Tween Brands in 2008, and the company had almost completely converted its remaining Limited Too stores to Justice stores at the time of the Ascena acquisition.