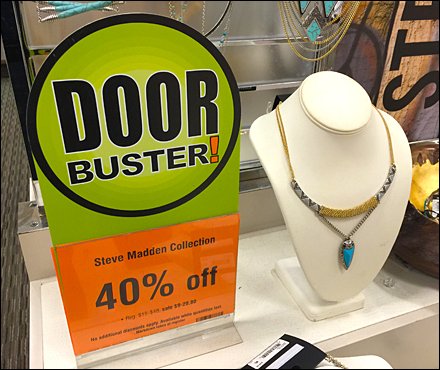 SCROLL DOWN FOR PHOTOS AND LINKS…
…to Door Buster Store Fixtures

This Door Buster Store Fixtures index page aggregates links
to all post and photos of retail merchandising, display, and outfitting
as well as deep Background courtesy of Wikipedia.

BACKSTORY: In economics, a doorbuster deal is an offer which is handed out early into the business’s opening hours. These deals are designed to attract large numbers of shoppers into the business.

A typical doorbuster deal is an item or selection of items which is given a special discount price for a limited amount of time. This offer is referred to as a doorbuster in reference to literal incidents in which doors were broken down by a flood of people struggling to get the goods before they sold out. Doorbuster deals are usually employed on major shopping days, such as Black Friday and Boxing Day.

An unfair practice of “doorbusting” consists in advertising great deals on products despite possessing a low quantity in stock (“wihle quantities last” as it may be advertised in small prints) in order to lure customers in the store to buy other regular-priced products when the discounted one run out.[1]

In November 2008, a crowd of 2,000 waiting for the 5 am opening of a doorbuster event at a Walmart in New York broke the sliding-glass doors out of impatience and the following stampede of the crowd rushing in the store fatally injured a store employee.[2] (SOURCE: Wikipedia)