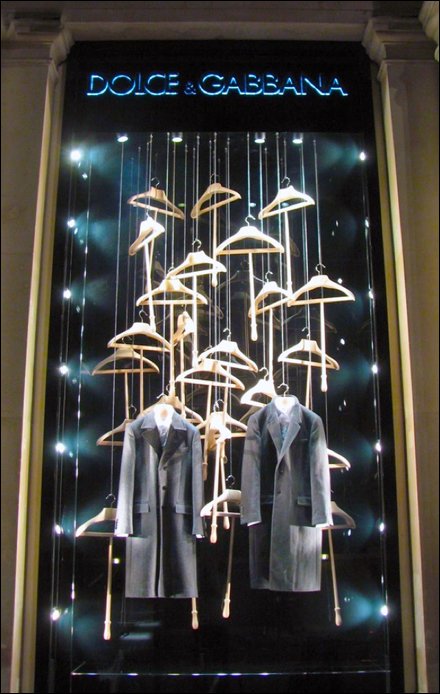 SCROLL DOWN FOR PHOTOS AND LINKS…
…to Dolce & Gabbana Retail Fixtures

This Dolce & Gabbana Retail Fixtures index page aggregates links to all post and photos of the brand’s retail merchandising and outfitting.

The two met in Milan in 1980 and designed for the same fashion house. In 1982 they established a designer consulting studio; in time it grew to become “Dolce & Gabbana”. They presented their first women’s collection in 1985[3] in Milan, where a year later their store would open its doors.

In 1988, they launched a leotard line, and in 1989 they began designing underwear and swimming costumes. Dolce & Gabbana started to export their products to Japan and other countries including the United States, where they founded their own showroom in 1990. In 1992, the same year that they presented their men’s collection, they also launched their first perfume Dolce & Gabbana. They won the Woolmark award in 1991, and Perfume’s Academy “Most Feminine Flavor of the Year” in 1993 for their fragrance Dolce & Gabbana Parfum. By the end of the 1990s, the company’s revenues were around $500 million and in 2003 their revenue reached $633 million. By 2005, their turnover was €600 million.[4]

The first collection from the design duo was shown in October 1985[3][5] alongside five other up-and-coming Italian labels as part of Milan Fashion Week. The two did not have enough money to hire models or provide accessories for them, so they sought help from their friends. The models (their friends) simply wore their personal items to complement the clothing. They used a bed sheet that Dolce had brought from home as their stage curtain.[6]

The pair labeled their first collection Real Women, due in part to the use of local women as models on the runway.[5] Sales from their first collection were disappointing enough for Gabbana to cancel the fabric order they’d put in to create their second collection. However, Dolce’s family offered to help meet their costs when the two visited them in Sicilyover Christmas, while incidentally, the fabric company did not receive the cancellation notice in time so the fabric was ready for them back in Milan upon their return.[7] They produced the next collection in 1986 and opened their first store that same year.[5] Michael Gross wrote of their third collection in a 1992 interview, “They were a secret known only to a handful of Italian fashion editors. Their few models changed behind a rickety screen. They called their collection of T-shirt-cotton and elastic-silk pieces, Transformation”. The clothing in this collection came with instructions on the seven different ways a piece could be worn in an outfit, as the wearer could use Velcro and snaps to alter the clothing’s form.[8]

Their fourth collection was the first to make a significant impact on the Italian fashion market. In this collection, Dolce drew upon his Sicilian roots. The collection’s advertising campaign was shot by photographer Ferdinando Scianna in Sicily, and featured Dutch model Marpessa Hennink in black and white pictures[9][10] inspired by the Italian cinema of the 1940s. They continued the use of Italian cinema as inspiration in their fifth collection, drawing on the work of filmmaker Luchino Visconti and his film The Leopard.[5]

One of the pieces from their fourth collection was labeled “The Sicilian Dress” by the fashion press, and was named by author Hal Rubenstein as one of the 100 most important dresses ever designed. It is considered to be the most representative piece of this era for the brand. Rubenstein described the piece in 2012 by writing, “The Sicilian dress is the essence of Dolce & Gabbana, the brand’s sartorial touchstone. The dress takes its cue from a slip—but it’s a slip that’s adorned Anna Magnani, and it’s a silhouette that has graced Anita Ekberg, Sophia Loren, [and so forth]. The straps fit tight to the body just as bra straps would; the neckline runs straight across but gets waylaid at least twice, once on each side to caress each breast and in the middle to meet an uplifting tuck that’s giving a gentle push up. The slip doesn’t just slide down, but comes in at the waist to hold the figure firmly but not too tightly and then widens to emphasise the hips, only to fall with a slight taper at the knees to guarantee that the hips will sway when the wearer walks.” (SOURCE: Wikipedia)