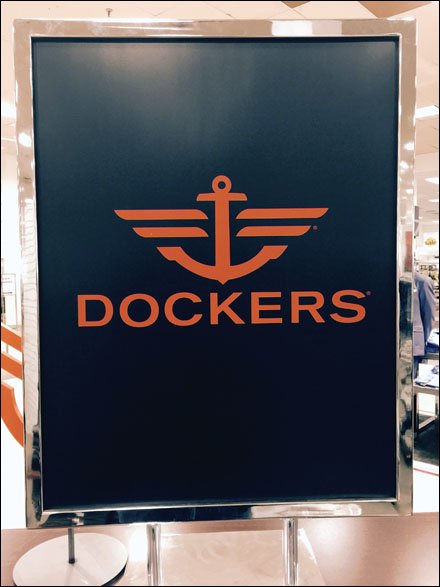 This Dockers Retail Fixtures index page aggregates links to all post and photos of the brand’s retail merchandising and outfitting.

BACKSTORY: Dockers is a brand of khaki garments and other accessories from Levi Strauss & Co. Levi Strauss & Co., then specializing in denim, introduced the Dockers brand in 1986. Dockers became a leading brand of business casual clothing for men under the leadership of Bob Siegel.[1] In 1987, Dockers introduced a women’s line. In 1993 the Dockers brand was introduced into Europe under the leadership of Joe Middleton. Dockers makes belts, pants, leather wallets, shoes and other apparel.

In 1853[2] Levi Strauss lands in San Francisco after leaving his home of Bavaria. After getting his business going, he resumed selling goods to the American people. Some of the goods he sold included clothes and foot wear.

Dockers emerged as one of the largest boat shoes manufacturers in the Northwest, for people to wear shoes on the Dock.

Still in the early 1900s, khakis become domestic and are worn for “classier” occasions. All the while, undergoing a few label changes. 1916 marks the creation of the label “Levi Strauss Make” which khakis then fell under. In the 1920s, Levi Strauss and Co. began the production of women’s khakis made specifically for out door activity and comfort all in one.[3] By the late 1920s, khaki undergoes another label change and now falls under the famous “Two Horse Brand”.

in 1963, the company opened its first warehouse below the Mason–Dixon line. The new factory was located in Blackstone, Virginia. The late 1900s consisted of major moves on a business level, making Levi Strauss and Co. a brand that has gone global and been very successful.[4] Before going global in 1992, Dockers made an appearance on an episode of Seinfeld.

In the 2000s, the company starts producing denim and continues to expand into different countries. By 2011, khakis were being worn by both genders of all ages.

A 1996 study shows that a pair of Dockers pants often had a price range of $50-$80 per pair.[5] A study in 2014 helped compare older prices to more current prices within the Dockers label. This article[6] shows that in 2014 a pair of Dockers pants sells for roughly $140 and a long sleeve shirt reaches prices as high as $120.[7] Because of these prices, Dockers can be viewed as a brand favored by more affluent households. In 2012, 27.9 percent of respondents who came from a household where the annual income was $200,000 or more stated that they owned Dockers brand apparel, accessories, and footwear.[8]