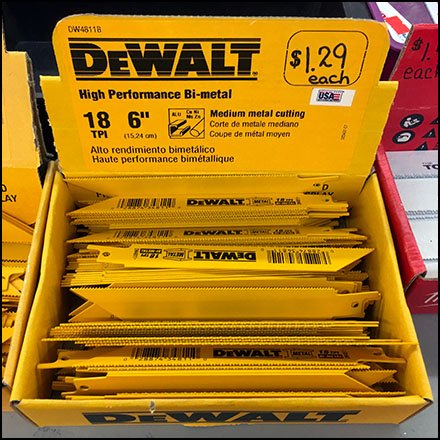 SCROLL DOWN FOR PHOTOS AND LINKS…
…to DeWalt Retail Fixtures

This DeWalt Retail Fixtures index page aggregates links
to all posts and photos of retail merchandising, display, and outfitting
as well as deep Background courtesy of Wikipedia.

BACKSTORY: DeWalt (trademarked as DᴇWALT) is an American worldwide brand of power tools and hand tools for the construction, manufacturing and woodworking industries. It is a subsidiary of Stanley Black & Decker.

The original company was started in 1923 by Raymond E. DeWalt, the inventor of the radial arm saw. The company grew quickly and was reorganized and re-incorporated in 1947 as DeWalt Inc.

Black & Decker divested itself of the radial arm saw manufacturing branch in 1989, selling it to two executives. Radial arm saws that use the original DeWalt design can still be obtained from the Original Saw Co.[2]

In 2004, Black and Decker bought rival power tool manufacturer Porter-Cable and combined it with DeWalt in Jackson, Tennessee.[3]

In 2011, DeWalt launched a line of contractors’ hand tools (including utility knives, pliers, adjustable wrenches, tape measures, saws, and hammers).[4] In 2013, the line was expanded to include mechanics’ tools (wrenches, ratchets, and sockets).[5][6]

In 2013, DeWalt issued a press release stating it would be bringing some assembly of a small selection of their products to the US using globally manufactured parts from Brazil, China, the Czech Republic, Italy, Mexico, the UK, and the US. The products assembled in the US would be branded under the label, “Built in the USA with global materials.”[7]

In April 2016, DeWalt created an Android-powered smartphone designed for building industry workers. The device costs £379 ($544), is designed to survive a 2m drop onto concrete and can operate in temperatures ranging from -20C to 60C. [9]

On September 1, 2016, DeWalt debuted an industry-first hybrid voltage battery pack it branded “FlexVolt”. The pack runs at either 20V (18V nominal) or 60V (54V nominal) depending upon whether it is placed into a 60V FlexVolt tool or one of their 20V Max tools. The pack switches between connecting the battery cells in series (60V, 2Ah) or parallel (20V, 6Ah) depending upon the activated pin configuration determined by the power tool. [10] (SOURCE: Wikipedia)