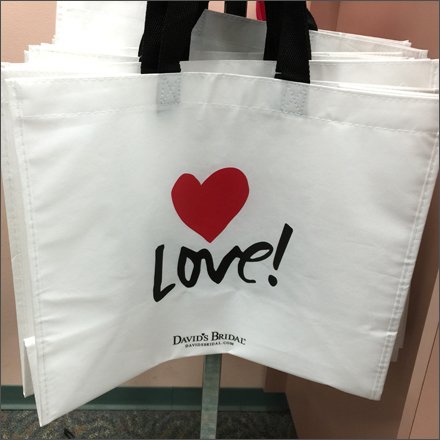 This David’s Bridal Retail Fixtures index page aggregates links to all post and photos of the brand’s retail merchandising and outfitting.

BACKSTORY: David’s Bridal is a clothier in the United States that specializes in wedding dresses, prom gowns, and other formal wear. It is the largest American bridal-store chain.[1]

David’s Bridal currently operates more than 300 stores in 45 states, Canada, the United Kingdom, and Puerto Rico. It was acquired by May Department Stores in 2000, which was, in turn, bought by Federated Department Stores (the parent company of department store giant Macy’s) in 2005. On November 17, 2006, David’s Bridal was purchased by Leonard Green & Partners, on the same day that Federated also divested itself of After Hours Formalwear. On October 11, 2012, Clayton, Dubilier & Riceannounced the completion of its acquisition of David’s Bridal, Inc.[2]

Beginning in 1945, David Reisberg decided that, instead of making wedding gowns for his personal pleasure, he should sell them to others for a profit. In 1950, David’s Bridal first started out as a small bridal boutique in Fort Lauderdale, Florida. The soon-to-be well-known bridal chain all started as a brainchild of David Reisberg, hence the name David’s Bridal. In 1972, Floridian Phillip Youtie purchased the salon with optimistic ideas. Between that time and 1988, Youtie successfully grew his investment from a single store to 18 boutiques. Many of these boutiques were leased bridal stores that were in department stores under the David’s Bridal name. Steven Erlbaum, a late childhood friend of Youtie, eventually joined forces with Youtie to help bring David’s Bridal to all 50 states. Erlbaum, having preexisting experience from creating the Philadelphia-based store chain Mr. Good Buys (now defunct), was able to give knowledge to Youtie. Erlbaum and Youtie eventually incorporated the company, structuring it for the national market. A warehouse was built in Hallandale Beach, Florida—near Fort Lauderdale. The corporate headquarters are now based in Conshohocken, Pennsylvania.[1]

Stores at this time stocked only sample gowns in a standard size. Youtie and Erlbaum changed the store model in the late 1980s with this warehouse off Interstate 95 where they stocked designer gowns, discontinued dress and manufacturer over runs at below retail prices. This chain of bridal stores was like none of its kind. David’s Bridal was all about making a no-frills shopping environment for those who need an expensive wedding dress for a fraction of the price. Stores were not really comfortable, but more plain and warehouse-like. Although there was little to no comfort in the stores, brides-to-be could expect a bargain. Years later, as the business grew even larger and larger, small stores were starting to go out of business while more David’s Bridal stores were being put into business. Between 1994 and 1995, 12 stores were added to the bridal corporation. In 1999, DABR went public with over $104 million in assets and selling 8 million shares. In 2000, the May Department Stores Company bought David’s Bridal from Youtie and Erlbaum for $436 million.[1] By this time, David’s Bridal was the largest retailer of bridal gowns and wedding related merchandise. On November 17, 2006, David’s Bridal was purchased by Leonard Green & Partners. David’s Bridal is now the only nationwide competitor of bridal stores.[1] One in four American brides are dressed by David’s Bridal.[1]