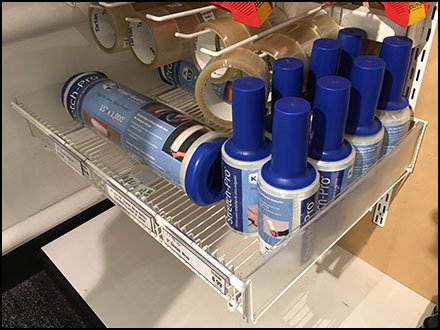 This The Container Store Store Fixtures index page aggregates links
to all post and photos of retail merchandising, display, and outfitting
as well as deep Background courtesy of Wikipedia.

On July 1, 1978, The Container Store opened in a small, 1,600-square-foot (150 m2) retail space in Dallas. Kip Tindell (Chairman and CEO), Garrett Boone (Chairman Emeritus), and architect John Mullen opened a retail store offering a mix of products devoted to helping people simplify their lives. In doing so, they originated a new category of retailing (storage and organization). Initial cash capital was provided by Garrett, his father, and John Mullen, who were founding directors, officers and shareholders of the company.[4][5][6] In 1999, the company bought one of its main suppliers, Elfa International, a Swedish corporation that specialized in shelving and storage units.[7]

In February 2007, its owners announced that they were “exploring alternatives,” including selling the company to private investors, in order to fund future growth. They stated that they would not sell unless they received guarantees that the corporate culture was preserved. On July 2, 2007, the company announced that they had closed a deal with a private equity firm based in Los Angeles, Leonard Green & Partners, which obtained a majority stake.[9][10][11]

Garrett Boone and Kip Tindell met while working in the paint department of Montgomery Ward.[12] The first store location outside Texas opened in Atlanta, Georgia in April 1991.[13] By December 1998, the chain had grown to 18 stores in operation.[14] In October 2000, its first New York metropolitan area store opened.[15] As of November 2004, it had 33 locations,[16] and reached 38 with the opening of the first Los Angeles arealocation in October 2006.[17]

Following the deal with Leonard Green & Partners, announced in July 2007, the company announced plans to open 29 more stores in the next five years. The first Arkansas location (Little Rock) opened in March 2008, followed by the first Arizona location (Scottsdale) in the summer, and the first Minnesota location (Edina) and second Ohio location (Cincinnati) that fall. [11][relevant? – discuss]

As of May 2016, The Container Store has 80 locations, with plans to open several stores in the following months.[18] On May 9, the company announced that Kip Tindell would be stepping down as CEO and would be succeeded by COO and president Melissa Reiff.[19][20] (SOURCE: Wikipedia)

EDITOR’S NOTE: The Container Store Store Fixtures
Topmost posts may be scheduled but not yet live.
Please click further down the list if necessary.

For The Container Store Store Fixtures by title see…

For all The Container Store Store Fixtures resources…