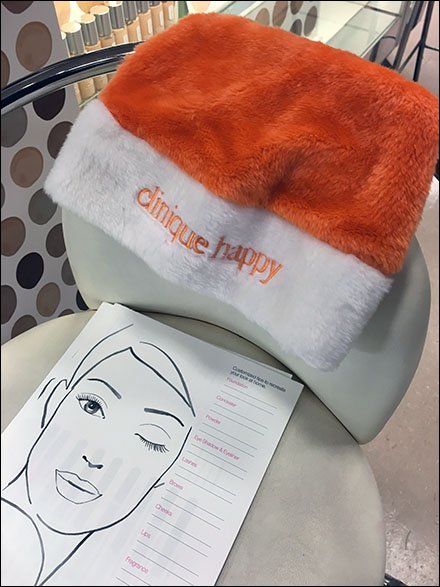 BACKSTORY: Clinique Laboratories, LLC (/klᵻˈniːk/) is an American manufacturer of skincare, cosmetics, toiletries and fragrances, usually sold in high end department stores. It is a subsidiary of the Estée Lauder Companies.

In 1967, American Vogue magazine published an article called “Can Great Skin Be Created?”, written by beauty editor Carol Phillips with Norman Orentreich, discussing the significance of a skin-care routine. Evelyn Lauder, daughter-in-law of Estée Lauder, read the article,[1] and brought it to Estée’s attention. Both Carol Phillips and Orentreich were recruited to help create the brand, and in August, 1968, Clinique premiered as the world’s first allergy tested, dermatologist-driven line at Saks Fifth Avenue.[2]

Evelyn Lauder, an executive at Estée Lauder and member of the Lauder family, created the Clinique brand name and developed its line of products.[3] Lauder worked as the training director for Clinique.[3] She was the first person to wear the trademark white lab coat, now worn by Clinique Consultants worldwide.[3]

Clinique was the third brand that was “born” from the Lauder Group after Estée Lauder and Aramis.

In 2008, Clinique announced a partnership[4] with Allergan, the maker of Botox and former cosmeceutical partner of Elizabeth Arden, with the result being a new line called Clinique Medical. The line is only available in physician’s offices. The 5-product set is designed for pre- and post-operation skin care, and targets complications such as redness, tightness, burning, irritation, discoloration, among others that “slow the healing process.” (SOURCE: Wikipedia)

The Estée Lauder Companies Inc. (/ˈɛsteɪ ˈlɔːdər/) is an American manufacturer and marketer of prestige skincare, makeup, fragrance and hair care products. The company owns a diverse portfolio of brands, distributed internationally through retail channels and digital commerce, and has its headquarters in Midtown Manhattan, New York City.

Over the next 15 years, they expanded the range and continued to sell their products in the United States. In 1960, the company started its first international account in the London department store Harrods. The following year it opened an office in Hong Kong.

In 1964, they introduced Aramis, a line of fragrance and grooming products for men named after an exotic Turkish root originally used as an aphrodisiac.[7] In 1967, Estée Lauder herself was named one of ten Outstanding Women in Business in the United States by business and financial editors[citation needed]. This was followed by a Spirit of Achievement Award from Albert Einstein College of Medicine at Yeshiva University in 1968. In that year, the company expanded again, opening Clinique Laboratories, Inc. Clinique was the first dermatologist guided (Dr. Norman Orentreich), allergy tested, fragrance-free cosmetic brand created by Estée Lauder.

Estée Lauder’s Clinique brand became the first women’s cosmetic company to introduce a second line for men when, in 1976, they began a separate line called “Skin Supplies for Men”, which continues to be sold at Clinique counters worldwide. In 1981, the company’s products became available in the Soviet Union.

In the 1990s, brand acquisitions and licensing agreements contributed to explosive growth as the Company transformed from a family-owned business to a publicly-traded, family-controlled organization. The decade opened with the creation of Origins — the first wellness brand in U.S. department stores. The first licensing agreement for fragrances was with fashion designer Tommy Hilfiger in 1993, followed by Kiton, an Italian fashion house (1995), and with American fashion designer Donna Karan (1997).[8]

Brand acquisitions began with an investment in the Toronto-based M•A•C Cosmetics in 1994, which the company then acquired in 1998. Bobbi Brown Cosmetics, designed by the celebrated makeup artist, was acquired in 1995, as was La Mer – along with the original recipe for its supreme luxury product, Crème de la Mer, containing the nutrient-rich Miracle Broth™. The Company ventured into its first hair care and holistic beauty brand with Aveda in 1997. The renowned fragrance house Jo Malone London was acquired in 1999.[9]

Acquisitions and licensing continued in the 2000s as The Estée Lauder Companies bought a majority interest in Bumble & bumble, the trendy hair care salon, and completed its acquisition in 2006; an exclusive global licensing agreement was signed with fashion designer Michael Kors (2003). Designer Tom Ford begins a project with the Company and later an agreement was signed with him (2005) to develop and distribute fragrances and cosmetics under the Tom Ford Beauty brand. [13]

On July 1, 2010, the company acquired Smashbox Beauty Cosmetics, Inc., a brand created in Smashbox Studios in Culver City, California, by brothers Dean and Davis Factor (as in Max).[14]

On October 28, 2011, Aramis and Designer Fragrances, a division of The Estée Lauder Companies Inc., and Tory Burch LLC announced the signing of a multiyear agreement for the exclusive worldwide license of the Tory Burch fragrance business. This partnership marked Tory Burch’s first step into the beauty industry. The first Tory Burch fragrance products were introduced in 2013.[15]

In 2012, the company launched AERIN Beauty, a luxury lifestyle beauty and fragrance brand inspired by the signature style of its founder, Aerin Lauder.

Pull-Out Drawer for Clinique For Men