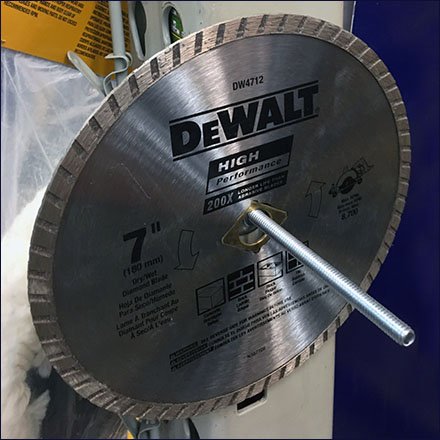 This Circular Saw Blade Store Fixtures index page aggregates links
to all post and photos of retail merchandising, display, and outfitting
as well as deep Background courtesy of Wikipedia.

BACKSTORY: A circular saw is a power-saw using a toothed or abrasive disc or blade to cut different materials using a rotary motion spinning around an arbor. A hole saw and ring saw also use a rotary motion but are different from a circular saw. Circular saws may also be loosely used for the blade itself. Circular saws were invented in the late 18th century and were in common use in sawmills in the United States by the middle of the 19th century.

A circular saw is a tool for cutting many materials such as wood, masonry, plastic, or metal and may be hand-held or mounted to a machine. In woodworking the term “circular saw” refers specifically to the hand-held type and the table saw and chop saw are other common forms of circular saws. “Skil saw” has become a generic trademark for conventional hand-held circular saws. Circular saw blades are specially designed for each particular material they are intended to cut and in cutting wood are specifically designed for making rip-cuts, cross-cuts, or a combination of both. Circular saws are commonly powered by electricity, but may be powered by a gasoline engine or a hydraulic motor which allows it to be fastened to heavy equipment, eliminating the need for a separate energy source.[1]

Sawmills first used smaller diameter circular saws to resaw dimension lumber such as lath and wall studs and for edging boards. As the technology advanced large diameter saw blades began to be used for the head saws and to cut clapboards.

Circular saw cutting characteristics include: cutting is by teeth on the edge of a metal blade or by an abrasive wheel; the cut has narrow kerf and relatively smooth surface finish; cuts are straight and relatively accurate; the saw usually leaves burrs on the cut edge of metal and plastic (which should then be addressed with sand paper); and saw setting should be done geometrically

In woodworking the term circular saw is most commonly used to refer to a hand-held, electric circular saw designed for cutting wood, but may be used for cutting other materials with different blades. Circular saws can be either left or right-handed, depending on the side of the blade where the motor sits. A left-handed saw is typically easier to use if held in the right hand, and contrariwise for the right-handed saw, because the user does not need to lean across the saw to see the cutting line. (SOURCE: Wikipedia)