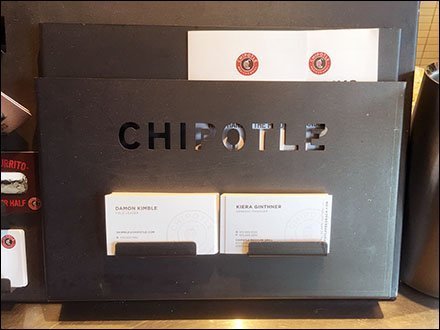 SCROLL DOWN FOR PHOTOS AND LINKS…
…to Chipotle Mexican Grill Outfitting

This Chipotle Mexican Grill Outfitting index page aggregates links
to all post and photos of retail merchandising, display, and outfitting
as well as deep Background courtesy of Wikipedia.

BACKSTORY: Chipotle Mexican Grill, Inc. (/tʃɪˈpoʊtleɪ/, chih-POHT-lay)[7] is an American chain of fast casual restaurants in the United States, United Kingdom,[8] Canada,[9][10] Germany,[11] and France,[12] specializing in tacos and Mission-style[13][14] burritos. Its name derives from chipotle, the Nahuatl name for a smoked and dried jalapeño chili pepper.[15] The company trades on the New York Stock Exchange under the ticker symbol CMG.[16]

Founded by Steve Ells on July 13, 1993, Chipotle had 16 restaurants (all in Colorado) when McDonald’s Corporation became a major investor in 1998. By the time McDonald’s fully divested itself from Chipotle in 2006,[19] the chain had grown to over 500 locations.

In May 2018, Chipotle announced the relocation of their corporate headquarters to Newport Beach, California in Southern California, ending their relationship with Denver after 25 years. (SOURCE: Wikipedia)