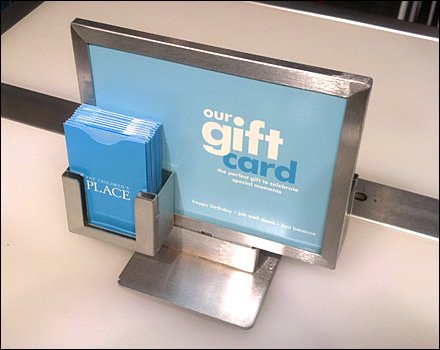 This Children’s Place Retail Fixtures index page aggregates links
to all post and photos of retail merchandising, display, and outfitting
as well as deep Background courtesy of Wikipedia.

As of October 31, 2015, the Company operated 1,085 stores in the United States, Canada and Puerto Rico, an online store at www.childrensplace.com, and had 90 international stores open and operated by its franchise partners in 12 countries.[3] This Store is Aimed at Infants, Toddlers, Children, Tweens, & Young Teenagers ages 16 & younger

The company was founded in 1969. They became publicly traded on the NASDAQ exchange in 1997 under the ticker symbol PLCE. Between 2004 and 2007, the company owned and operated 335 Disney Stores through a subsidiary Hoop Holdings/Hoop Retail Stores LLC.[4]Disney sold the chain for the cost of inventory to Children’s Place subsidiary Hoop Holdings plus a 15-year licensing agreement.[5][4] Mario Ciampi, senior vice president of store development and logistics, was named Hoop/Disney Store North America president. The company agreed to pump $100 million in operation upgrades and remodeling.[6] Under the licensing agreement, a “royalty holiday” period existed until October 2006 to allow revamping of the stores. The royalty thereafter was 5% of store sales while online sales get Disney a 9% to 10% royalty. Hoop Holdings was able to write off the cost ($48 million) of the equipment and property received in the purchase.[5]

Hoops saw progress with its strategy as open stores in 2006 for 11 month saw 15% increase in sales assisted by a better Disney box office results and the Disney Channel hit High School Musical. A store website would be up and running in April 2007.[5]

In June 2007, the company began negotiations to sell the rights back to The Walt Disney Company.[4] On March 26, 2008, Hoop Holdings/Hoop Retail Stores LLC and related subsidiaries of TCP that operated Disney Store retail locations filed for bankruptcy.[4] Hoop obtained from Wells Fargo $35 million of debtor-in-possession financing and appointed Perry Mandarino of Traxi LLC, the Manhattan financial-restructuring company, as chief restructuring officer.[7] On May 1, 2008, 231 Disney Stores in North America once again became the property of Disney, operating under the Disney Consumer Products arm.[8]

In the summer of 2013, the store withdrew a T-shirt from the stores with four options for “My best subjects” including “Shopping, Music, Dance and Math.” While shopping, music, and dance were checked, math was left unchecked because as the T-shirt stated “Nobody’s perfect!”[10]

There was a factory which produced Children’s Place merchandise in the Rana Plaza building that collapsed just outside Dhaka, Bangladesh in April 2013.[11] The company then joined Alliance for Bangladesh Worker Safety along with other North American apparel retailers, and former U.S. Senators George Mitchell and Olympia Snowe. The Alliance’s mission is a five-year plan to improve conditions in Bangladeshi garment factories.

We Have WiFi Shelf Overlay Promo