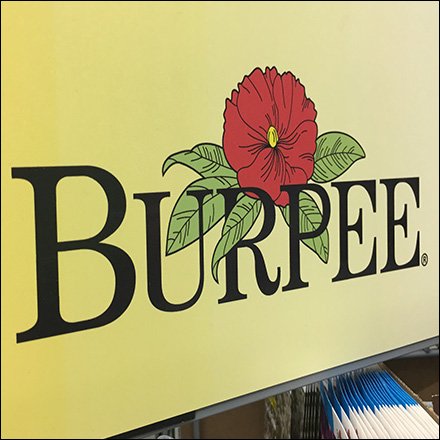 SCROLL DOWN FOR PHOTOS AND LINKS…
…to Burpee Seed Merchandising Display

This Burpee Seed Merchandising Display index page aggregates links
to all post and photos of retail merchandising, display, and outfitting
as well as deep Background courtesy of Wikipedia.

BACKSTORY: Burpee Seeds, officially W. Atlee Burpee & Co., is a seed company that was founded by Washington Atlee Burpee in 1876.[1] The company is not named after a relationship to “burpless” cucumbers.

The company first sold garden seeds, farm supplies, tools, poultry and hogs. The direction of the company began to change with the death of its founder in 1915, when his son, David Burpee, inherited the firm. David was interested in war or victory gardens and was an early promoter of the concept during World War I. He also prioritized in flowers and initiated several flower breeding programs.

In 1970, David Burpee sold his company to General Foods. In 1974, Burpee moved from its north Philadelphia location to its current headquarters at 300 Park Avenue in Warminster, Pennsylvania. SEPTA extended its Warminster Line commuter rail to Warminster, the train station being opposite Park Avenue from Burpee’s headquarters.

In 1979, the company was acquired by ITT. David Burpee remained as a consultant until his death in June 1980. In 1991, the Burpee company was acquired by George Ball, Inc., a diversified horticultural family business. Jonathan Burpee, the founder’s grandson, was the last Burpee family member to work for the company. The company maintains the original Burpee farm, Fordhook Farms, in Doylestown, Pennsylvania, where notable varieties such as Iceberg lettuce and Big Boy tomato were bred. The company currently sells a wide variety of seeds, plants in various forms, and garden accessories to home gardeners.  (SOURCE: Wikipedia)