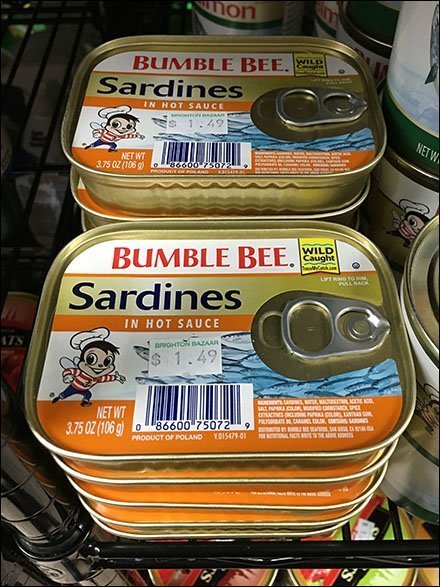 SCROLL DOWN FOR PHOTOS AND LINKS…
…to Bumble Bee Merchandising

This Bumble Bee Merchandising index page aggregates links
to all post and photos of retail merchandising, display, and outfitting
as well as deep Background courtesy of Wikipedia.

BACKSTORY: Bumble Bee Foods, LLC, is a company that produces canned tuna, salmon, other seafoods, and chicken under the brand names “Bumble Bee,” “Wild Selections,” “Beach Cliff,” “Brunswick,” and “Snow’s.”[1] The company is headquartered in San Diego, California, United States. The brand is marketed as Clover Leaf in Canada. It is now owned by the British private equity firm Lion Capital.[2]

The Bumble Bee company began in 1899 when seven salmon canners in Astoria, Oregon, formed the Columbia River Packers Association (CRPA) under the leadership of Andrew B. Hammond.[3][4] The Bumble Bee brand was introduced in 1910.[3] The CRPA incorporated in 1924, and in 1946, Transamerica acquired a controlling interest in CRPA, Inc.[4] After partnering with Wards Cove Packing Company in 1959, CRPA became the world’s largest salmon packer.[4] In 1961, Castle & Cooke acquired CRPA by merger and changed the name of the company to Bumble Bee Seafoods after its most famous brand.[4]

with Castle & Cooke’s sale of Bumble Bee in a leveraged buyout to management in 1985. The management team, having paid off their leveraged debt before their 5-year goal, sold Bumble Bee to Pillsbury in 1988 contingent upon the president, Patrick Rose, and the management team staying on for five years,[5] Pillsbury in turn, following its December 1988, hostile takeover by Grand Metropolitan PLC, was forced to sell the brand the next year to the Thai company Unicord.[6] Bumble Bee went bankrupt in 1997, and was sold to International Home Foods, the former food unit of American Home Products. ConAgra Foods acquired International Home Foods in 2000; it sold Bumble Bee to the private equity firm Centre Partners in 2003. The Canadian company Connors Brothers Limited merged with Bumble Bee in 2004. The company was renamed Bumble Bee Foods, LLCin 2005.[3] Centre Partners acquired the company again in 2008 and sold it to Lion Capital in 2010.

In August 2015, Bumble Bee Foods was sued, accused of colluding with Chicken of the Sea and StarKist to fix prices.[7] Bumble Bee’s former CEO, Christopher Lischewski, was indicted in May 2018 for price fixing.[8]

Bumble Bee Foods was in talks to merge with Chicken of the Sea, but the merger was called off on December 3, 2015, after the Department of Justice expressed “Serious Concerns” raised by Olean Wholesale Grocery, a regional wholesaler that had sued the two companies over alleged Sherman Antitrust Act violations.[1][9] (SOURCE: Wikipedia)

For all Bumble Bee Merchandising resources…