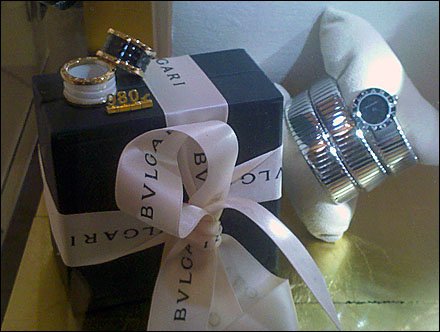 SCROLL DOWN FOR PHOTOS AND LINKS…
…to Bulgari Retail Fixtures

This Bulgari Retail Fixtures index page aggregates links
to all post and photos of the brand’s retail merchandising and outfitting.

The trademark is usually written BVLGARI in the classical Latin alphabet, and is derived from the surname of the company’s Greekfounder, Sotir Bulgari (Greek: Σωτήρ Βούλγαρη, Greek pronunciation: [soˈtir ˈvulɣari], Italian: Sotir Bulgari (1857–1932). The name Voulgaris itself contains the root word Βούλγαρ Greek for “Bulgarian”. Furthermore, in the company’s native Italy the word Bulgari means “Bulgarians” or people of Bulgarian descent.[2]

Sotirios Boulgaris (Greek: Σωτήριος Βούλγαρης, pronounced [soˌtirʝos vulˈɣaris]), born in an Aromanian village known as Kalaritesbegan his career as a jeweller in his home village Paramythia[3] (Epirus, Greece), where his first store can still be seen. In 1877, he left for Corfu and then Naples. In 1881 he finally moved to Rome, where in 1884 he founded his company and opened his second shop in Via Sistina. The store in Via Sistina was then replaced by the current flagship store in Via dei Condotti opened in 1905 by Bulgari with the help of his two sons, Costantino (1889–1973) and Giorgio (1890–1966).[citation needed]

During the Second World War, Costantino Bulgari and his wife Laura hid three Jewish women in their own Roman home. They were strangers to them; the Bulgaris opened their doors out of outrage for the raid of the Roman ghetto in October 1943. For their generous action, on 31 December 2003, they were awarded the title of Righteous among the Nations at Yad Vashem in Jerusalem.[4]

After Giorgio’s death in 1966, his son Gianni led the company as co-chief executive with his cousin Marina.[5] As chairman and CEO of Bulgari in the early 1970s, Gianni initiated the internationalization of the company by opening shops in New York, Geneva, Monte-Carlo and Paris. For many years the company maintained a showroom in New York’s The Pierre Hotel.[citation needed] In the late 1970s, Gianni led a complete overhaul of the company, establishing a new watch business and focusing on product design.[6] In 1985, Gianni resigned as CEO and in 1987, he left the family business after selling his one-third stake in the company to his brothers Nicola and Paolo.[7]

In 1984, Sotirio’s grandsons Paolo and Nicola Bulgari were named Chairman and Vice-Chairman of the company and nephew Francesco Trapani was named CEO. Trapani’s goal to diversify the company was started in the early 1990s with the release of the Bulgari perfume line. Under his tenure the company has established itself as a luxury goods brand recognized throughout the world.

On 6 March 2011 French luxury group LVMH Moet Hennessy Louis Vuitton SA announced that it was acquiring Bulgari SpA in an all-share deal for €4.3 billion ($6.01 billion), higher than LVMH had offered for any other company.[8] Under the deal, the Bulgari family sold their 50.4 per cent controlling stake in exchange for 3 per cent of LVMH, thereby becoming the second-biggest family shareholder behind the Arnaults in LVMH.[9] The takeover doubled the size of LVMH’s watches and jewellery unit, which at the time of the acquisition included Tag Heuer timepieces and De Beers diamond necklaces. The acquisition concluded on 4 October 2011 as Bulgari was delisted from the Borsa Italiana.

In the beginning of 2001. Bulgari Spa formed a joint venture with Luxury Group – the Luxury Division of Marriott International which also manages The Ritz-Carlton Hotel Company, L.L.C. to launch a new luxury hotel brand, Bulgari Hotels & Resorts. Bulgari opened its first hotel in Milan in 2004, a resort in Bali in 2006, followed by a hotel in London in 2012, with a further hotel scheduled to open in Shanghai[10] in 2015. In 2011, Bulgari Bali has been chosen by the readers of Smart Travel Asia magazine as number-2 of top places to stay in Asia. Current locations include Milan, London, and Bali with restaurants in Osaka and Tokyo. Future locations will include Shanghai, Beijing, Dubai, and Moscow.[11]

Bulgari jewelry design is distinctive and often imitated (and counterfeited). In the 1970s, many of the more expensive Bulgari pieces (such as necklaces, bracelets and earrings) were characterized by instantly recognizable, bold, architectural designs combining large and weighty gold links with interlocking steel. Bulgari is also famous for colored stones, especially sapphires mixed in unique formats. Genuine Bulgari watches have a unique serial number that is registered with the company.

Bulgari relies on a distribution network of about 300 stores, located in the most exclusive shopping areas in the world. The largest Bulgari store in the world is the 10-story Bulgari Ginza Tower in Tokyo, 940 square meters of retail floor space, including a restaurant and lounge bar.[citation needed]

Between 2009 and 2011, Bulgari donated 13 million Euros to Save The Children. By the end of 2011 the partnership was renewed. So far the donation has directly reached 334,101 children, trained 9,899 teachers and provided rehabilitation activities in 206 schools.[citation needed]  (SOURCE: Wikipedia)

EDITOR’S NOTE: Bulgari Retail Fixtures
Topmost posts may be scheduled but not yet live.
Please click further down the list if necessary.

For Bulgari Retail Fixtures and Displays by Title see..

For all Bulgari Retail Fixtures and Displays see…