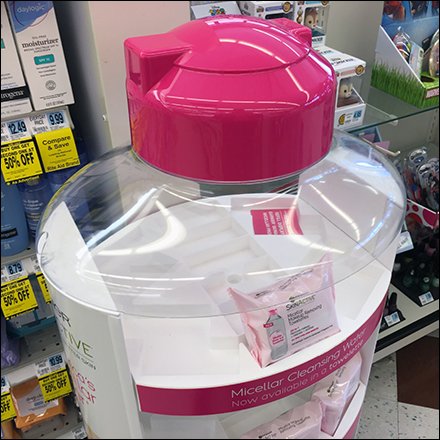 SCROLL DOWN FOR PHOTOS AND LINKS…
…to Bottle-Shaped Retail Fixtures

This Bottle-Shaped Retail Fixtures index page aggregates links
to all post and photos of the brand’s retail merchandising and outfitting.

BACKSTORY: A bottle is a rigid container with a neck that is narrower than the body and a mouth. By contrast, a jar has a relatively large mouth or opening which may be as wide as the overall container. Bottles are often made of glass, clay, plastic, aluminium or other impervious materials, and typically used to store liquids such as water, milk, soft drinks, beer, wine, cooking oil, medicine, shampoo, ink, and chemicals. A device applied in the bottling line to seal the mouth of a bottle is termed an external bottle cap, closure, or internal stopper. A bottle can also be sealed by a conductive “innerseal” by using induction sealing.

The bottle has developed over millennia of use, with some of the earliest examples appearing in China, Phoenicia, Rome and Crete. Bottles are often recycled according to the SPI recycling code for the material. Some regions have a legally mandated deposit which is refunded after returning the bottle to the retailer. (SOURCE: Wikipedia)

A glass bottle is a bottle created from glass. Glass bottles can vary in size considerably, but are most commonly found in sizes ranging between about 10ml and 5 litres. Common uses for glass bottles include food condiments, soda, liquor, cosmetics, pickling and preservatives. These types of bottles are utilitarian and serve a purpose in commercial industries.

Glass bottles and glass jars are in many households around the world. The first glass bottles were produced in south east Asia around 100 BCE, and in the Roman Empire around 1 AD.[1] America’s glass bottle and glass jar industry was born in the early 1600s when settlers in Jamestown built the first glass melting furnace. The invention of the automatic glass bottle blowing machine in 1880 industrialized the process of making bottles.[2]

The earliest bottles or vessels were made by ancient man. Ingredients were melted to make glass and then clay forms were dipped into the molten liquid. When the glass cooled off, the clay was chipped out of the inside leaving just the hollow glass vessel.[3] This glass was very thin as the fire was not as hot as modern day furnaces. The blowpipe was invented around 1 B.C. Now, molten glass could be gathered on the end of the blow pipe and blown into the other end to create a hollow vessel. Eventually the use of a mold was introduced, followed by the invention of a semi-automatic machine called the Press and Blow. In 1904 Michael Owens invented the automatic bottle machine.[4]

Once made, bottles may suffer from internal stresses as a result of unequal, or too rapid cooling. An annealing oven, or ‘lehr’ is used to cool glass containers slowly to prevent stress and make the bottle stronger.[5] When a glass bottle filled with liquid is dropped or subjected to shock, the water hammer effect may cause hydrodynamic stress, breaking the bottle.[6][7]

Modern bottles, when moulded, will be given marks on the heel (bottom) of the bottle. These marks serve a variety of purposes, such as identifying the machine used in the production of the bottle (for quality control purposes), showing the manufacturer of the bottle, how much to fill the bottle to, the date the bottle was manufactured, as well as other information. Embossing on a bottle consists of raised lettering, numbers, and/or designs which were intended to inform the purchaser in some way of the contents or to establish ownership of the bottle.[8][9][10][11]

Glass bottles have a variety of closures to seal up the bottle and prevent the contents escape. Early bottles were sealed with wax, and later stoppered with a cork. More common today are screw caps and stoppers.[12] (SOURCE: Wikipedia)

For all Bottle-Shaped Retail Fixtures resources…