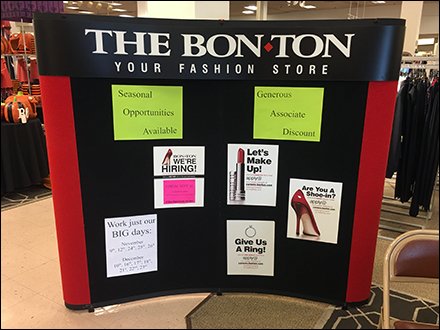 BACKSTORY: The Bon-Ton is a department store chain headquartered in York, Pennsylvania and Milwaukee, Wisconsin. There are 267 stores, which includes nine furniture galleries and four clearance centers, in 26 states.[4] Other brands operated by The Bon-Ton include Bergner’s, Boston Store, Carson’s, Elder-Beerman, Herberger’s, and Younkers. This Bon-Ton Retail Fixtures index page aggregates links to all post and photos of the brand’s retail merchandising and outfitting.

The Bon-Ton was started in 1898, when Max Grumbacher and his father, Samuel, opened S. Grumbacher & Son, a one-room millineryand dry goods store on Market Street in York, Pennsylvania. The store’s name was drawn from a British term connoting the “elite” or “high society.”

As automobiles replaced horses and the country became more industrialized, through World War I and the Roaring Twenties, the Grumbachers continued to meet their customers’ needs. The store grew bigger and, in 1929, the company was incorporated as S. Grumbacher & Son, Inc. In 1931, Max’s son, Max Samuel (M.S.), joined the company. When Max the elder died in 1933, his widow, Daisy, and their two sons, M.S. and Richard, continued the business, forming a partnership in 1936.

This was a popular store destination on the classic radio show Fibber McGee and Molly, which aired from 1935 to 1959.

Following World War II, the Grumbacher family decided to expand operations. In 1946, a second Bon-Ton was opened, in Hanover, Pennsylvania. Two years later, the company moved outside Pennsylvania, acquiring Eyerly’s in Hagerstown, Maryland, and, in 1957, purchasing McMeen’s in Lewistown, Pennsylvania. These early moves set The Bon-Ton’s policy of growing into adjacent areas by opening new stores and acquiring existing businesses.

During the next three decades, the Bon-Ton Stores continued to expand. In 1961, M.S.’s son, M. Thomas “Tim,” entered the business, representing the fourth generation of Grumbachers. During the 1960s, the company opened new Eyerly’s and Bon-Ton stores in several Pennsylvania communities and one in West Virginia. They also started a discount chain, Mailman’s, and in 1969, retired the McMeen’s name. During the 1970s, as the popularity of shopping centers began to grow, The Bon-Ton opened 11 new stores in Pennsylvania and West Virginia.

The 1980s formed a period of rapid consolidation in the retail department store industry as major chains bought their competitors. The Bon-Ton Stores began the decade by opening more stores, establishing a new division, Maxwell’s, and acquiring Fowler’s department store in New York. When Tim Grumbacher was made CEO in 1985, the company operated 18 stores in four states. Two years later, the company made a major move, buying the 11-store Pomeroy’s chain from Allied Department Stores. That purchase made it possible for the company to move into seven new markets in Pennsylvania. In 1991, The Bon-Ton acquired J.W. Rhodes in Ithaca, NY. The Bon-Ton entered the Lancaster, PA market in 1992 with the acquisition of two Watt & Shand locations in downtown Lancaster and Park City Center. The company continued to expand its New York presence in 1993 with a store in the Wilton Mall in Saratoga Springs in the former Addis & Dey’s space.

In July 1994, The Bon-Ton purchased the 127-year-old Adam, Meldrum, and Anderson Company chain based in Buffalo, New York, for $42.6 million. Around the same time, The Bon-Ton also purchased Chappell’s of Syracuse, New York and Hess’s of Allentown, Pennsylvania. The Bon-Ton initially retained and operated Hess’s flagship location until 1996, when it closed after nearly 100 years of continuous operation. The site was eventually demolished. Its current Allentown store, Hess’s former south Allentown location, is the anchor of the South Mall. In 1995, The Bon-Ton entered the Rochester, NY market in three former McCurdy’s locations, as well as in a former McCurdy’s space in Elmira. In the following spring, the company opened a fourth Rochester location in a former Sibley’s location. In March 1995, The Bon-Ton closed the landmark downtown Lancaster store. Later that year, they also closed the downtown AM&A’s location. 1998’s expansion included a new store in Westfield, Massachusetts, making it The Bon-Ton Stores’ first entry into the New England area.

In October 2003, The Bon-Ton would expand its reach into Ohio and the lower Midwest with the acquisition of the 69 store Elder-Beermanstore chain. Following an attempt to convert to a privately held company, Elder-Beerman was offered more cash for its outstanding stock as part of the buyout. The chain currently continues as a separate nameplate. (SOURCE: Wikipedia)