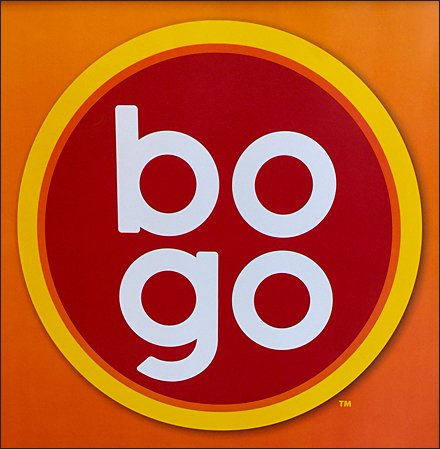 This BOGO Buy-One-Get-One Store Fixtures index page aggregates links
to all posts and photos of retail merchandising, display, and outfitting
as well as deep Background courtesy of Wikipedia.

Economist Alex Tabarrok has argued that the success of this promotion lies in the fact that the price actually takes into account the fact that two items are being sold. The price of “one” is somewhat nominal and is typically raised when used as part of a buy one get one free deal. Whilst the cost per item is proportionately cheaper than if bought on its own, it is not actually half price.[2]

Supermarkets were also being blamed for contributing to the increase in obesity through buy one, get one free promotions.[7] University of East Anglia’s Norwich Business School conducted research into products used in buy one, get one free deals. The results show a trend: buy one, get one free promotions are aimed towards unhealthy products, such as chocolate, sweets, soft drinks, etc.[8] Supermarkets might have to start using some of their marketing budget to specifically promote healthy products, and so would spend less money promoting unhealthy and fattening products. This is because The Department of Health has decided to step in and take action.[9]

Retailers use many promotional offers to increase sales, attract new customers, and keep old customers. Also, some countries have laws requiring products to be sold at full price for a specific period of time before they can be put on offer. Promotional offers are crucial in the retail industry; their many benefits play a large part in increasing sales, profit, and revenue. These promotional offers fall under different categories, and a few are listed below:[10][11] (SOURCE: Wikipedia)