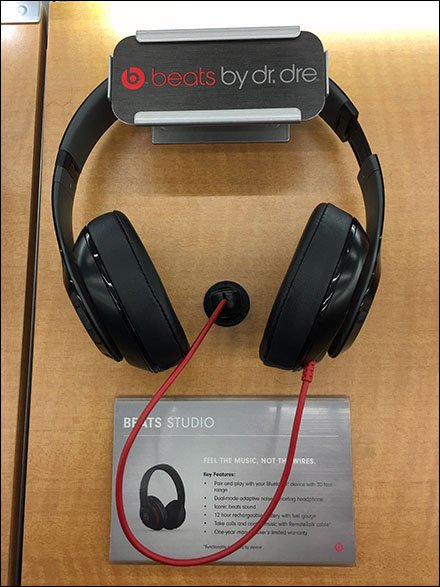 SCROLL DOWN FOR PHOTOS AND LINKS…
…to Beats-By-Dr.-Dre Merchandising Display

This Beats-By-Dr.-Dre Merchandising Display index page aggregates links
to all post and photos of retail merchandising, display, and outfitting
as well as deep Background courtesy of Wikipedia.

The subsidiary’s product line is primarily focused on headphones and speakers. The company’s original product line was manufactured in partnership with the AV equipment company Monster Cable Products. Following the end of its contract with the company, Beats took further development of its products in-house. In 2014, the company expanded into the online music market with the launch of its subscription-based streaming service, Beats Music. (SOURCE: Wikipedia)

BACKSTORY: Andre Romelle Young[5]:1 (born February 18, 1965),[6] known professionally as Dr. Dre, is an American rapper, record producer, entrepreneur, record executive, actor, and audio engineer. He is the founder and CEO of Aftermath Entertainmentand Beats Electronics, and was previously co-owner of Death Row Records. Dr. Dre began his career as a member of the World Class Wreckin’ Cru in 1985, but found fame with the influential gangsta rap group N.W.A, which popularized explicit lyrics in rap to detail the violence of street life. He is credited as a key figure in the crafting and popularization of West CoastG-funk, a hip hop subgenre characterized as synthesizer-based with slow, heavy beats. As of 2018, he is the third richest figure in hip hop, with a net worth of US$770 million.[7] (SOURCE: Wikipedia)

For all Beats-By-Dr.-Dre Merchandising Display resources…