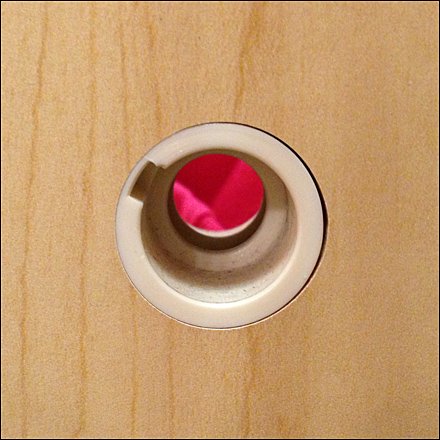 SCROLL DOWN FOR PHOTOS AND LINKS…
…to Bayonet-Mount Fixtures

This Bayonet-Mount Fixtures index page aggregates links
to all post and photos of retail merchandising, display, and outfitting
as well as deep Background courtesy of Wikipedia.

BACKSTORY: A bayonet mount (mainly as a method of mechanical attachment, as for fitting a lens to a camera) or bayonet connector (for electrical use) is a fastening mechanism consisting of a cylindrical male side with one or more radial pins, and a female receptor with matching L-shaped slot(s) and with spring(s) to keep the two parts locked together. The slots are shaped like a capital letter L with serif (a short upward segment at the end of the horizontal arm); the pin slides into the vertical arm of the L, rotates across the horizontal arm, then is pushed slightly upwards into the short vertical “serif” by the spring; the connector is no longer free to rotate unless pushed down against the spring until the pin is out of the “serif”.

The bayonet mount is the standard light bulb fitting in the United Kingdom and in many countries that were members of the British Empireincluding Pakistan, Australia, Hong Kong, Fiji[1] India, Sri Lanka, Ireland, and New Zealand, parts of the Middle East and Africa and, historically, France and Greece. (SOURCE: Wikipedia)

Bayonet Mount Hooks feature Male and Female connectors. The Female connector typically has an L-shaped slot that rotates to lock onto the Male Pin. Bayonet Mounts deter easy, straight removal of the Hook, but can nevertheless be rotated for quick release if desired.

For Bayonet-Mount Fixtures by Title…