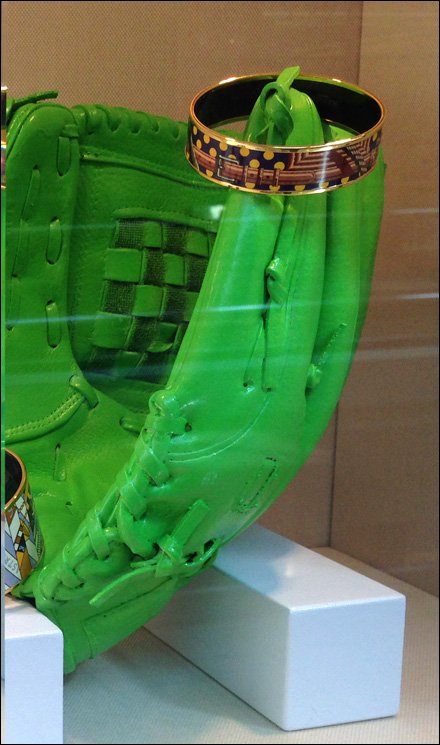 This Baseball Retail Fixtures And Merchandising index page aggregates links
to all posts and photos of retail merchandising, display, and outfitting
as well as deep Background courtesy of Wikipedia.

BACKSTORY: Baseball is a bat-and-ball game played between two teams of nine players each who take turns batting and fielding. The batting team attempts to score runs by hitting a ball (that is thrown by the opposing team’s pitcher) with a bat swung by the batter, and then running counter-clockwise around a series of four bases: first, second, third, and home plate. A run is scored when a player advances around the bases and touches home plate.

Players on the batting team take turns hitting against the pitcher of the fielding team, which tries to prevent runs by getting hitters out in any of several ways. A player on the batting team who reaches a base safely can later attempt to advance to subsequent bases during teammates’ turns batting, such as on a hit or by other means. The teams switch between batting and fielding whenever the fielding team records three outs. One turn batting for both teams, beginning with the visiting team, constitutes an inning. A game is composed of nine innings, and the team with the greater number of runs at the end of the game wins. If scores are tied at the end of nine innings, extra innings are usually played. Baseball has no game clock, although most games end in the ninth inning.

Baseball evolved from older bat-and-ball games already being played in England by the mid-18th century. This game was brought by immigrants to North America, where the modern version developed. By the late 19th century, baseball was widely recognized as the national sport of the United States. Baseball is currently popular in North America and parts of Central and South America, the Caribbean, and East Asia, particularly in Japan, South Korea, and Taiwan.

In the United States and Canada, professional Major League Baseball (MLB) teams are divided into the National League (NL) and American League (AL), each with three divisions: East, West, and Central. The major league champion is determined by playoffs that culminate in the World Series. The top level of play is similarly split in Japan between the Central and Pacific Leagues and in Cuba between the West League and East League.

The World Baseball Classic, organised by WBSB, is the major international competition of the sport and attracts the top national teams from around the world. (SOURCE: Wikipedia)

For Baseball and Glove fixturing by Title see…

For Baseball Caps and Odds-n-Ends by Title…

For a related Home Runs try…

For all Baseball Retail Fixtures And Merchandising resources…

For all Baseball Retail Fixtures And Merchandising resources…