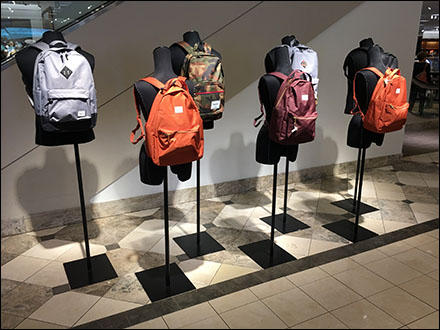 SCROLL DOWN FOR PHOTOS AND LINKS…
…to Backpack Store Fixtures

This Backpack Store Fixtures index page aggregates links
to all post and photos of retail merchandising, display, and outfitting
as well as deep Background courtesy of Wikipedia.

BACKSTORY: A backpack — also called bookbag, kitbag, knapsack, rucksack, pack, or sackpack backsack — is, in its simplest form, a cloth sack carried on one’s back and secured with two straps that go over the shoulders, but there can be variations to this basic design. Lightweight types of backpacks are sometimes worn on only one shoulder strap.

Backpacks are commonly used by hikers and students, and are often preferred to handbags for carrying heavy loads or carrying any sort of equipment, because of the limited capacity to carry heavy weights for long periods of time in the hands.

Large backpacks, used to carry loads over 10 kilograms (22 lb), as well as smaller sports backpacks (e.g. running, cycling, hiking and hydration), usually offload the largest part (up to about 90%) of their weight onto padded hip belts, leaving the shoulder straps mainly for stabilising the load. This improves the potential to carry heavy loads, as the hips are stronger than the shoulders, and also increases agility and balance, since the load rides nearer the wearer’s own center of mass.

In ancient times, the backpack was used as a means to carry the hunter’s larger game and other types of prey and as a way of easier transport for other materials. They were also easy to carry and made of cloths. In the cases of larger hunts, the hunters would dismember their prey and distribute the pieces of the animal around, each one packing the meat into many wrappings and then into bags which they placed on to their backs. The bag itself would be made up of animal hide and skin and sewn together by animal intestines, which would be woven together tightly to make a sturdy thread-like material.[citation needed] (SOURCE: Wikipedia)

For all Backpack Store Fixtures resources…