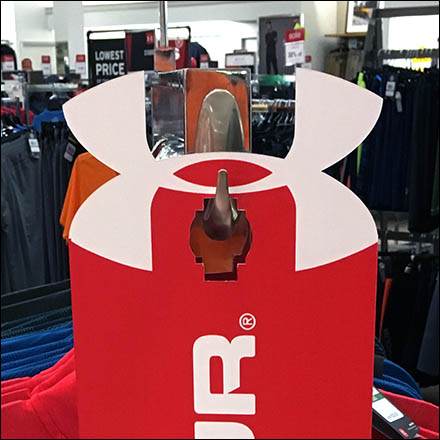 SCROLL DOWN FOR PHOTOS AND LINKS…
…to Under Armour Retail Fixtures

This Under Armour Retail Fixtures index page aggregates links
to all post and photos of retail merchandising, display, and outfitting
as well as deep Background courtesy of Wikipedia.

Under Armour was founded in 1996 by Kevin Plank, a then 23-year-old former special teams captain of the University of Maryland football team. Plank initially began the business from his grandmother’s basement in Washington, D.C.[7] He spent his time traveling up and down the East Coast with nothing but apparel in the trunk of his car. His first team sale came at the end of 1996 with a $17,000 sale. From his grandmother’s basement, Plank moved to Baltimore. After a few moves in the city he landed at his current headquarters in Tide Point.[8]

As a fullback at the University of Maryland, Plank got tired of having to change out of the sweat-soaked T-shirts worn under his jersey; however, he noticed that his compression shorts worn during practice stayed dry. This inspired him to make a T-shirt using moisture-wicking synthetic fabric.[9] After graduating from the University of Maryland, Plank developed his first prototype of the shirt, which he gave to his Maryland teammates and friends who had gone on to play in the NFL. Plank soon perfected the design creating a new T-shirt built from microfibers that wicked moisture and kept athletes cool, dry, and light.[7] Major competing brands including Nike, Adidas and Reebok would soon follow in Plank’s footsteps with their own moisture-wicking apparel.[10] Plank opted to use the British spelling “armour” in the company name because the toll-free vanity number was still available for that version.[11]

People began to take notice of the brand when a front page photo of USA Today featured Oakland Raiders quarterback Jeff George wearing an Under Armour mock turtleneck. Following that front page, Under Armour’s first major sale came, when an equipment manager from Georgia Tech requested 10 shirts from Plank. This deal opened the door to a contract with Arizona State University, North Carolina State and other Division I football teams. With positive reviews from players, word began to spread and orders began to increase.[9] That same year, Under Armour launched with several new apparel lines including ColdGear, TurfGear, AllseasonGear, and StreetGear.[9] By the end of 1996, Under Armour had sold 500 Under Armour HeatGear shirts, generating $17,000 for the company.[9] In 1997, Plank had $100,000 in orders to fill and found a factory in Ohio to make the shirts. (SOURCE: Wikipedia)

For Under Armour Retail Fixtures posts by Title see..

Follow Under Armour T-Shirt Display
at Gander Mountain at…

For all Under Armour Retail Fixtures resources see… 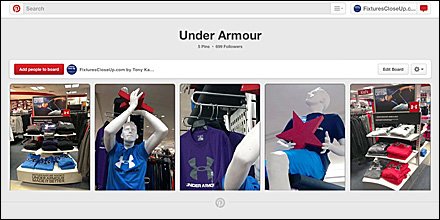