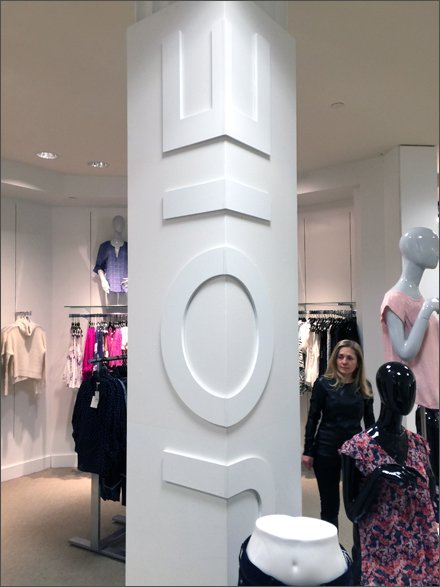 SCROLL DOWN FOR PHOTOS AND LINKS…
…to Architectural Column Outfitting

This Architectural Column Outfitting index page aggregates links
to all post and photos of retail merchandising, display, and outfitting
as well as deep Background courtesy of Wikipedia.

BACKSTORY: A column or pillar in architecture and structural engineering is a structural element that transmits, through compression, the weight of the structure above to other structural elements below. In other words, a column is a compression member. The term column applies especially to a large round support (the shaft of the column) with a capital and a base or pedestal,[1] which is made of stone, or appearing to be so. A small wooden or metal support is typically called a post, and supports with a rectangular or other non-round section are usually called piers.

For the purpose of wind or earthquake engineering, columns may be designed to resist lateral forces. Other compression members are often termed “columns” because of the similar stress conditions. Columns are frequently used to support beamsor arches on which the upper parts of walls or ceilings rest. In architecture, “column” refers to such a structural element that also has certain proportional and decorative features. A column might also be a decorative element not needed for structural purposes; many columns are engaged, that is to say form part of a wall. A long sequence of columns joined by an entablature is known as a colonnade. (SOURCE: Wikipedia)

For all Architectural Column Outfitting resources…